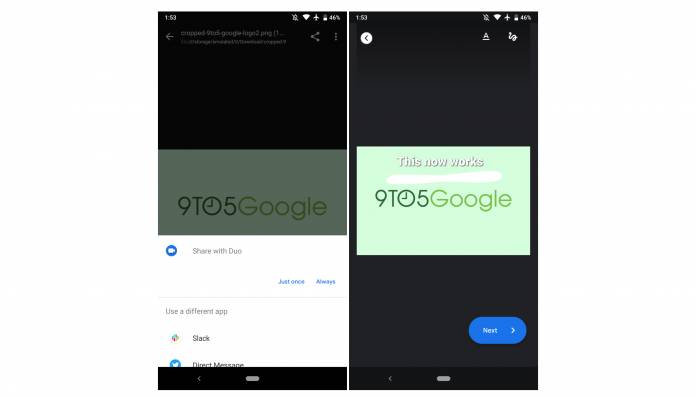 Google Duo is primarily known for its voice calling and video chatting services but Google may also have messaging plans for it soon based on the latest new thing that they brought to the app. Version 56 has rolled out to some users and with it comes the ability to share images to other users. Well, sort of. The app has now been added to the share sheet of Android so you can choose it when sharing an image to another user.

The ability to share photos through Duo doesn’t work “normally” as you would in a messaging app. You can’t browse and send directly from inside the app. According to 9 to 5 Google, hat happens is when you’re viewing a photo in your gallery and you tap on the share button, you’ll now see Google Duo in the system share sheet.

Once you tap on Duo, you will then be brought to the app, add drawing or text to the photo and choose which recipient or multiple contacts you want to send the photo to. The recipient will then get a notification that someone sent them a “New Photo”. It can be viewed only for the next 24 hours and there are also shortcuts to “Call now” or “Reply” with a video.

It doesn’t seem to have a reply with a photo option though. So if you want to send a photo, you’ll have to do the whole process mentioned above. You also can’t find Duo yet in the share sheet when trying to share a video. This may be just some initial glitches and will probably or hopefully be fixed in future updates.

This may be an indication that Google is planning to make Duo a chat client as well, especially if they will eventually add text capabilities. Let’s see in the future updates what their other plans are.