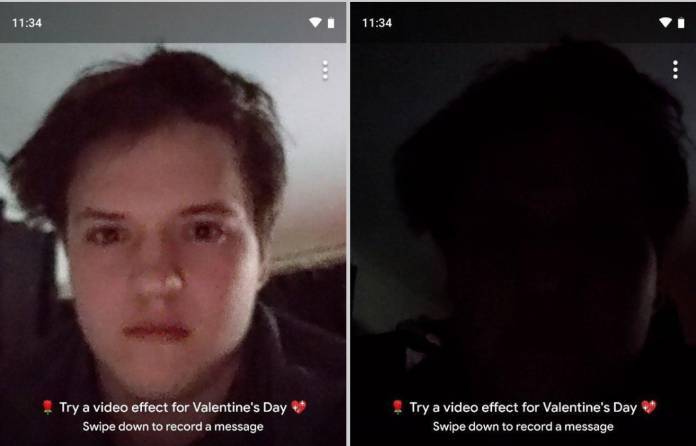 While Google hasn’t officially rolled out the new features yet, some folks over at XDA Developers love to experiment with upcoming new things by enabling them and then testing it out. The next update for Google Duo will probably include the low light mode and some Valentine’s Day treats to play around with and so a member tried it out first and saw that one of the great things with this mode is you can video chat even when you’re in the dark.

XDA Developer member Max Weinbach recorded a video call he was making where he was in complete darkness and was using the low light mode of the Google Duo app. Well, he did have a light source from a phone on the side shining its flashlight up so that the low light mode will be at a higher frame rate. The quality is not up to par with the Night Sight, but it’s a pretty good tool to have if you need to video chat in low light conditions.

If you’re more of a romantic sort, Google Duo also has a Valentine’s Day treat for you, specifically some heart effects that you can use during your video call. The heart bubbles come up from the bottom of the screen and will go around your head. This may actually be an early version of the rumored bokeh effect that Google Duo will soon add, maybe even with a blur effect.

While Google gave up on its Allo messaging app, it seems like they’re going all in in with Google Duo as they’re hoping this will become a successful communications app for consumers. For enterprise users, Google Hangouts will probably be the more “professional” version when it comes to video calls and messaging.