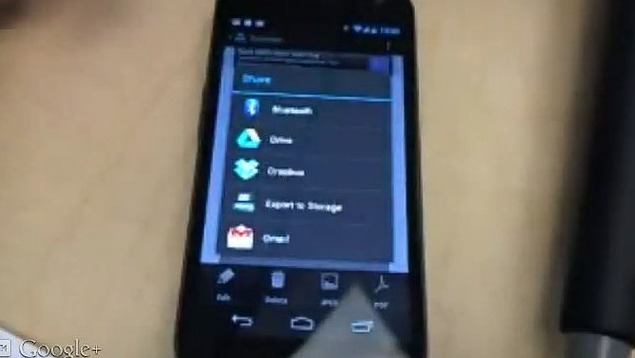 We are all still awaiting some sort of announcement or official details surrounding Google’s cloud storage option, Google Drive, but today have received an early look of what to expect in some fashion. While various rumors are heavily favoring a release next week, Drive has been spotted in the wild on developer phone. Being streamed on AndroidDevelopers we get the early look presented below.

Sadly it’s a little blurry and wasn’t being streamed in HD, but you can clearly see the standard Android share to option showing Google “Drive”. Obviously we expected something very similar to this, as you’ll be able to share pictures, video, documents and more to your Drive. Sadly this seems to be the only little glance we see, and how exactly it will all work and look still remains to be seen. To check it out yourself head to around 36:30 in the video from the via link below.

For those not in the loop. Google Drive should be something similar to Dropbox and other cloud storage options, but hopefully better and more integrated into Google’s services. Latest rumors suggest Google Drive will launch early next week, around Tuesday, and will give users 5GB of free cloud storage. Google should be releasing more information very soon if indeed it launches next week. If this video is any indication the system seems ready to go with multiple developers already using it.