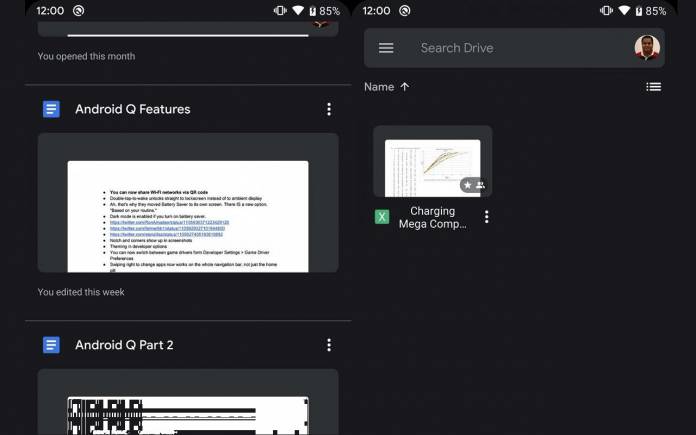 Dark themes are better. They are better for the eyes and for gadget displays. Reading and browsing with bright text and dark background isn’t too stressful for the eyes. No wonder many mobile apps and OS are choosing to come up with dark themes and rolling them out for use by more people. We remember YouTube getting it last year. And just recently, Facebook Messenger has also introduced a dark theme. We know many people prefer darker themes but they’re not easily available.

One particular app that has recently received a dark theme is Google Drive. There is no official announcement but an XDA developer discovered it on Google Drive 2.19.112.

The theme works with the Android Q’s system-wide toggle. It’s not exactly a publicized feature but it’s there on the first Android Q beta version.

If you see a hidden flag, the dark mode on Android Q can be enabled on the Google Drive app for Android. It can be compared with the Material Theme but most tabs and icons are now dark gray. Interestingly, there is no toggle to turn on or off the dark mode in Google Drive’s, at least, not yet.