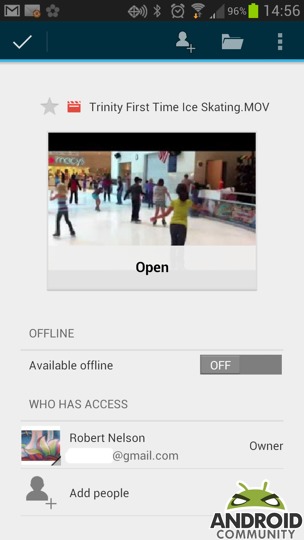 The latest update for the Google Drive app has landed in the Google Play Store. The update is probably not what could be considered major, however there does seem to be enough to consider it worthwhile. Those updating will see the version number go up to 1.1.592.10 and that will bring some performance improvements and bug fixes as well as two new features.

Google didn’t specify the specific performance improvements and instead have said that they are “across the whole app.” The same goes for the bug fixes, Google described this as the general sounding “bug fixes and other improvements.” Both points were nice to see, but again, nothing that will have anyone overly excited. After all, the Google Drive app on Android (at least in our experience) had been pretty solid.

Moving on and we come to the first of the two new features — pinch to zoom. More specifically, this update brought pinch to zoom support in the presentation viewer. This one will probably be a bit more beneficial for those on a smartphone with a smaller screen as opposed to someone with a larger smartphone or tablet, but either way, you can now zoom while in the presentation viewer.

The video streaming support. This one comes with a catch in support. While the Google Drive app supports Froyo (2.2) or later, the streaming video is only for those running Honeycomb (3.0) or later. Needless to say, it is simple enough — once your video is uploaded to Drive you will be able to stream it directly in the app. Just click the video and then click the “open” to begin playing. Other options for the videos including making it available for offline use and seeing who has access to the video.