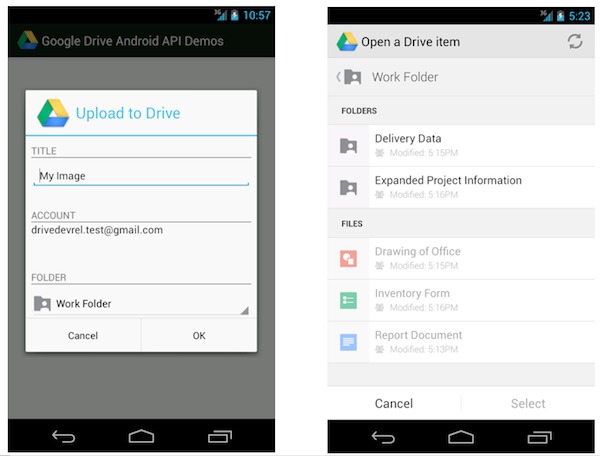 Cloud storage is one of those quirky things we’re all supposed to love, but do we really accept it? Often, cloud storage is left as a workaround, and not seamlessly integrated, making it a tough proposition for some. Google has introduced a Google Drive API for Android, which should make the process of saving and sharing files from the cloud a lot easier.

Essentially, the Drive API for Android allows for Developers to integrate Drive right into an app. For those times when you’re not connected to a data service, or are out and about and have your uploads set to “WiFi only”, the API will keep a file locally, which acts like a waiting room of sorts. Once you’re in a position to have the files saved to Drive, they’ll upload straight away.

It’s also lightweight, and conforms to all the recent design tweaks Google has made. The library is part of the Google Play Services, so all a Developer really has to do is implement the API. It works on any device running Gingerbread or later, too, which is just about every Android device around. It also doesn’t sound like Google is limiting it to Drive:

With this, expect to see a Play Services update sometime soon. Direct integration is great, and the obvious lean toward Drive is fine with us. We like Drive for many reasons, but the openness of this one is also really nice to see.