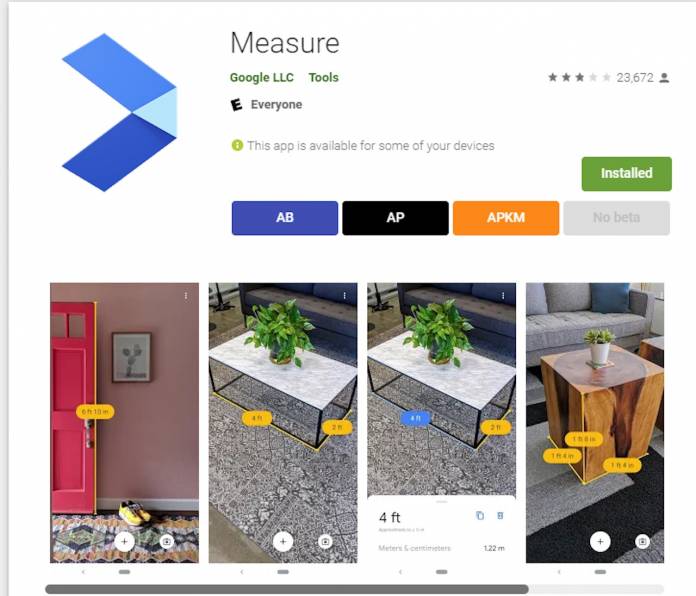 Google gives and Googles taketh away. Over the years we’ve seen a lot of Google apps come and go, to the point that someone created a digital graveyard called Killed By Google. Well that site is getting a new entry again as the AR-based measurement app called Measure is being killed off. There’s no official press release or fanfare but the app listing has been taken down for those who have not previously downloaded it. Google confirmed that they will no longer support maintenance for the app.

If you’re not familiar with this particular app, we can’t blame you as it was not really majorly promoted. It initially launched back in 2016 as part of the Tango app but once Google eventually killed off that experiment, Measure became a standalone app for devices that supported ARCore in 2018. Basically, you could use your camera to measure the dimensions of stuff in the real world, leveraging on the AR technology. Point your camera at an object, draw lines on your screen, and get the measurements.

It received a few updates every now and then, like making it work on vertical surfaces, a few surface animations and several unit conversions. However, in reality, the measurements weren’t always accurate and the app itself had some stability issues. Reviews on the Google Play Store weren’t particularly glowing so now that it’s going away, there will probably no tears shed over its demise. Android Police reported that the app listing says the app is no longer supported and it will not be updated anymore.

The sort of good news is that users who previously installed Measure can still continue using it. Even if you uninstalled it already, you can go to your app library and reinstall it and it would still work. But that’s the “final version” already so whatever bugs it still has will no longer be corrected or fixed. But at least if you don’t have an actual tape measure and you need to measure something, there’s a backup app for that.

Even as Google strangely still highlights the app as a feature on its AR & VR experiences site, they also confirmed that what the app listing says is correct. They recommend trying some of the alternatives that are available on the Google Play Store. Who knows, you might discover something better anyway.