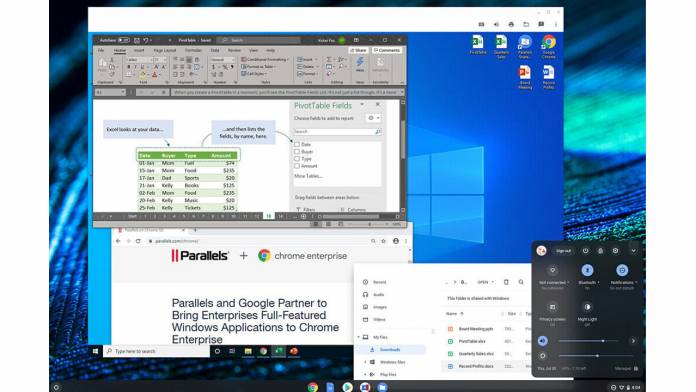 Just recently Google rolled out the Explore app to help Chromebook users educate themselves with their device more effortlessly.  Now we learn that Google is bringing enterprise Chromebooks with support for Windows applications courtesy a partnership with Parallels. The announcement was made earlier this year, but now we have more details on how this will work and benefit users. It is worth noting that users will now be able to use the two operating systems side-by-side – other software being the ChromeOS of course.

Google provided the details in an interview with The Verge. Reportedly, Google wishes to provide Windows apps that can be accessible when you need them. It will be your choice to hop in and out and have easy access to existing Windows desktop apps on Google’s lightweight and smooth Chromebook devices.

Group product manager for Chrome OS, Cyrus Mistry informs that Parallels will boot a full copy of Windows so the two operating systems can be run side-by-side. According to Mistry, for making things seamless for users, Chrome OS will even redirect certain Windows file types to Parallels.

Mistry further informed that Google did look for options of dual boot for Chromebooks but the same didn’t really work out well because of security concerns in boot process. He informs that Parallels provides “best of both worlds” to let the users hop in and out between apps in the same ecosystem.

It is worth noting that Parallels already allows users to run Windows apps on Mac like they were native apps. Google sought this to work in their favor and partnered with Parallels to run Windows operating system inside of Chrome OS. Interestingly, this lets user to run the Windows apps they need instead of running the entire Windows desktops apps.

Google has set up a page for interested businesses who want their employees to have the best of Windows on Chromebook devices to get in touch. According to Google, the Parallels Desktop will be coming to devices for business by the end of this year – no pricing or compatibility details have been shared yet.