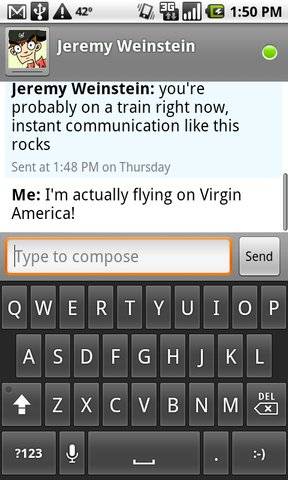 Google is reportedly readying an Apple iMessage and BlackBerry Messenger rival of its own, according to the latest rumors, potentially allowing Android device owners to bypass SMS and MMS messaging on their handsets and tablets. According to the WSJ, Google “has also recently worked on a messaging application, a person familiar with the matter said.”

The rumors have surfaced in the aftermath of Apple’s iMessage announcement, part of the upcoming iOS 5 upgrade to the iPhone, iPad and iPod touch. Like RIM’s BBM, iMessage will allow for text, photo and multimedia messages, sent to individuals and to groups.

Details on Google’s system are unclear, though of course the company already has Google Talk, its IM app that integrates with Android devices as well as Gmail users in the browser and as a standalone app for PC. The most likely route seems to be enhancing GTalk so that it supports the same advanced functionality as iMessage and BBM, with the added bonus of being compatible with the established desktop ecosystem.