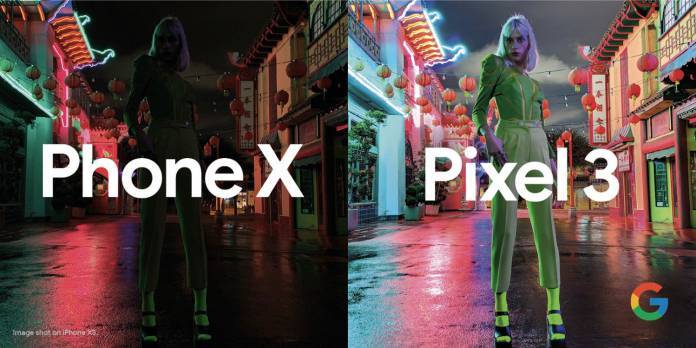 Now that the Night Sight camera feature has been rolled out to all Pixel devices, Google will probably be marketing it heavily, especially now that Super Bowl weekend is almost upon us. They have released what is probably an initial ad comparing what the feature looks like on the Pixel 3 and “Phone X” and obviously, the former looks way better than the latter. And as expected and obviously, the other phone used is an iPhone, specifically an iPhone XS.

The new ad is a side-by-side comparison of similar photos taken with different smartphones. At the lower left of the Phone X feature is a note that says the image was taken with an iPhone XS. The picture beside it labeled Pixel 3 has Google’s multi-colored G logo on the bottom right. The neon-green wearing subject is unrecognizable in the iPhone picture while she is much clearer on the Pixel 3.

The Night Sight feature uses machine learning to balance out the colors which is of course way better than using a flash during low light situations. It also merges a burst of shots so that the final output remains bright and sharp and not blurry at all. The lighting in the background may be a bit washed out but your purpose is probably to capture the main subject as best as you can.

Expect this to just be the first part of an advertising campaign for the Pixel devices that will be focusing on the Night Sight feature. Hopefully, it won’t always be a comparing it against it rivals as that technique gets tired eventually. Let’s wait for what Google will release during the Super Bowl weekend which is also known as the advertising olympics.

Night Sight on Google Pixel3 — pretty much speaks for itself ? #teampixel pic.twitter.com/ao0Yi2W2Sq