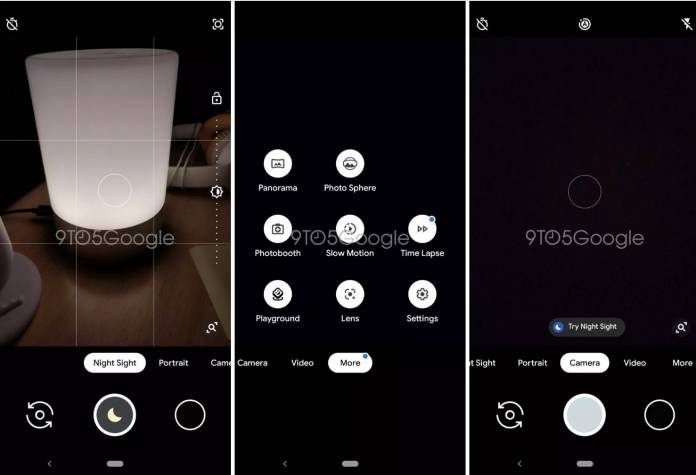 While we’re still waiting for Android Q to officially roll out the stable version, we’re getting indications on what to expect with the beta build of the update. One of the things we can expect is a Google Camera update, specifically to version 6.3. There has been a slight revamp of the app’s UI which includes putting the Night Sight in the main camera instead of hidden in the More section. The white balance / color temperature control has also been removed plus other small tweaks were made in this version.

Night Sight is one of the best features to the camera that will come in Android Q. Previously, you could not easily access it in the camera app and you have to go to the More section in order to use it or it will appear as a suggestion when you’re taking pictures in the dark. But now with the latest update reported on 9 to 5 Google it is replacing Panorama in the main interface alongside Portrait, Camera, and Video. All you have to do is swipe right or tap right from the main carousel. The Night Sight pill will still appear when you’re using it in low light situations.

You will also no longer see the white balance/color temperature controls when taking a picture. Currently, it appears as a temperature icon in the top bar regardless of what mode you’re using. The previous presets include Auto, Cloudy, Sunny, Fluorescent, and Tungsten. Another change is in the Portrait mode where the front-facing “Flash”, which actually is a brightening of the camera UI, has been renamed to “Illumination”. You’ll see a translucent sepia filter with the live camera feed behind it. There’s also on/off and no auto setting for the illumination.

There are also some minor changes like the Google Lens icon sporting a new version that was unveiled at the I/O conference last May and the Panorama version being moved to the More tab replacing Night Mode. There are probably some other minor tweaks that will come with it so we have to wait until it rolls out the stable version.

However that will probably come with the Android Q update expected sometime later this year, although version 6.3 actually works with Pie when it’s “forced”. We’ll update you if there will be any changes to their roll out plans.