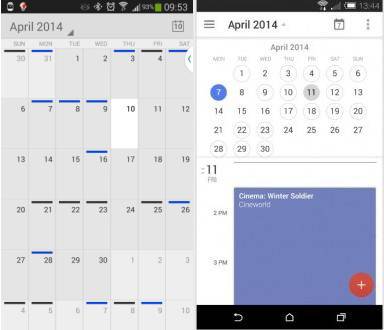 It’s been almost a year since Google‘s proprietary calendar app got a visual tweak and another one seems to be on its way. The folks over at Geek.com has revealed screenshots of what is supposedly an upcoming major update, showing a calendar that adopts a flatter yet more visually pleasing aesthetic.

Google Calendar is already flat, no doubt about that. But while it does adopt a non-skeumorphic look, it also falls a bit flat compared to other calendar apps who have adopted an equally minimalist design. Now it seems that Google applied a good amount of design taste in the upcoming version of the app. These changes were spotted in an internal testing version codenamed “Timely”, not to be confused with the Timely app that was purchased by Google not too long ago.

Here we see a calendar that eschews grids and lines for a cleaner look. Dates and events are delineated with circular outlines and fills. The app employs judicious use of blocks of colors for events and headers. The app also sports fluid animations, particularly when transitioning from month to month, employing parallax effects and random background images like more photo-centric calendar apps of late to give off a more personal atmosphere.

Looks aren’t the only changes in the app, however. Also seen was a new daily agenda view that collates a single day’s worth of activities. The app also features new social network integration which other apps might already have for some time now. There is still no word or rumor when this new version of Google Calendar will roll out, but given how polished it already seems, it might not be that long now.