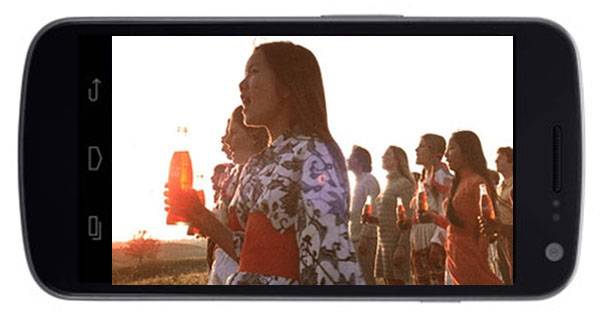 It’s a happy day for children and dentists the world over. Google and Coca-Cola have partnered for a new advertising campaign that recalls the 1971 “hilltop” ad and literally buys the world a Coke. Users on Android and iOS with AdMob-served browser or app ads can click on Coca-Cola ads and send a free Coke to specially-made vending machines around the world, saving a random stranger a buck or two and making their lunchbreak. Of course ,none of this would be worth it without a little feel-good validation, so you can send a “Here’s your Coke!” message to the vending machine, and receive an email or video response from your thankful recipient.

The campaign is part of a series of ads made by Google and its marketing partners, re-creating classic advertising with modern technology. The Coca-Cola ad takes things very literally, in a way that wouldn’t have been possible without some serious technical work on Google’s part (not to mention millions of dollars in disposable income).  Google brought together the original creators of the Coke “hilltop” commercial, Avis’ “We Try Harder” campaign, Vovlo’s “Drive it like you hate it” ads and the Alka-Seltzer “Ralph” commercial to bring them into the 21st century. (No word on a certain 1984 ad, sorry.)

You can see the Coca-Cola effort here -more will follow in the next few weeks:

And here’s an overview of the Project Re:Brief program itself:

Unfortunately, there’s no way to give yourself a free soda with your phone – that would bankrupt even Google pretty much instantly. But there is some pretty neat stuff happening here, starting with a live video feed of the vending machine where your generosity is appreciated. If you should happen to send a Coca-Cola to a country where you don’t speak the language, Google Translate will help out with some textual conversation.