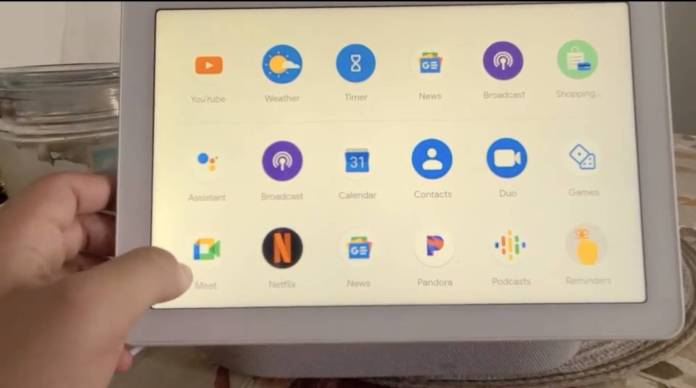 If you have one of the Nest Hub devices, except for the first-generation ones, you’ll be glad to know that it will be easier now to launch apps as the smart displays will finally be getting an app drawer. This was previewed a few months ago but now the final version has started rolling out to the 2nd gen Nest Hub and the Nest Hub Max through the Cast firmware update version 1.56. The app drawer has shortcuts for both Google apps and a few third-party apps as well.

Once you’ve updated your supported smart display, you’ll be able to see the new app launcher which has shortcuts to some of the most-used Google apps and services on hubs like Calendar, Duo and Meet, YouTube, and Podcasts. You also get shortcuts to third-party apps like Netflix, Pandora, Spotify, and Zoom. Accessing the app drawer is pretty easy as you just need to drag your finger up from the bottom of the display, as per Android Police.

Aside from the app shortcuts, the app drawer also has a few quick setting options and a link to view all the services. Of course, it’s not the same as you would see on a smartphone or a tablet, as you cannot do things like custom sorting or creating and arranging folders. Still, it is better than being able to launch apps through card suggestions only, like the previous version of the Nest Hub devices that we experienced.

If however what you have at home is the original Google Home Hub or the first generation Nest Hub, you’ll have to wait a little while longer or maybe even forever. Their firmware is still stuck in version 1.52 and there is no news yet if they’ll get an update to version 1.56 or something better. If you’d like to get an app drawer or a better smart display, then maybe it’s time for an upgrade but if you’re good with what you have now, then stick to it.

You can update your Nest Hub to the latest version to see and experience the app drawer. Of course, since this is a smart display with Google Assistant baked in, you can always use voice commands to launch apps and do other things on your device.