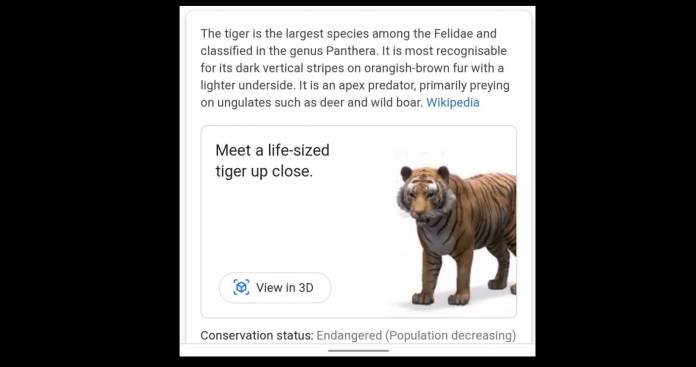 When you’re bored or when you’re interested to learn more about a specific animal or creature, you probably just Google stuff. Google added an augmented reality variation to that by introducing 3D search results which you can see up close and personal, at least digitally. These AR creatures have been pretty popular especially during these past few months when the chances of seeing one in person have dwindled drastically. Now Google is adding 50 more animals to the AR fold, including a lot of dogs.

If you’ve never explored these 3D AR creatures yet, Google started introducing several collections the past few months, including dinosaurs, insects, planets, skeletons, science-related stuff, etc. The idea is to view a 3D replica of the creature on your smartphone and then place them in your environment if you want to have a bit of fun. Homeschooling parents have used this to bring studying animals to life so to speak while some just use it for fun and for pictures.

Now Google announced that they’re adding 50 new AR animals that you can discover on the Google Search app. They highlighted a few animals like a pig sniffing through the refrigerator, a life-sized giraffe, a giant chow chow you can goof around with, and a zebra roaming a neighborhood. There are several new dog and cat breeds included in this batch like a bulldog, chihuahua, kitten, Sphynx cat, etc.

Hip(po), hip(po), hooray! 🦛 There are 50 new AR animals to discover on Search. Search for your favorite animal on your Google mobile app, tap "View in 3D" to see them in your space and don’t forget to share your best creations with #Google3D. pic.twitter.com/u80Mn7wi1z

Just like with the previous AR creatures, finding them is pretty simple. Just search for a particular animal on the Google app or on your mobile browser. Scroll through the results until you see the animated card telling you that you can meet the life-sized creature up close. Tap it and then zoom in and out to see the accurate model and sometimes it comes with actual sounds as well. Then you can place them in your room or in the street and take pictures and videos of you interacting with the AR animal.

Google will probably be bringing more AR search results in the future so just watch out for further announcements. The folks at 9 to 5 Google have a comprehensive list of what AR things you can find on search.