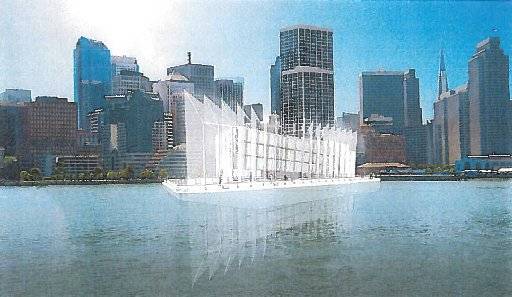 The mystery surrounding two barges off the opposite coasts of the US maybe be somewhat over, but the final appearance of these structures are pretty much still unknown. But if this artist’s rendering is truly what the barges are to become, then we can expect to see something eye-catching and majestic when Google is finally done.

Google isn’t directly admitting what the barges really are for just yet, but it has come out to say that they are considering using it as an interactive space for educating people about technology, making it sound like some sort of traveling tech exhibit or museum. In fact, the barge has been associated with Google X, so it could just about cover anything technology-related under the sun. Of course, it could also just be a showroom and an exotic place for Google to hold press conferences. So while we now know that Google is, indeed, in charge, the exact purpose of these floating buildings are practically still open to speculation.

By and Large, a mysterious company that is rumored to be associated with Google, has submitted documents to the Port of San Francisco that not only sheds a bit more light on the edifice but even includes a rendition of what the final product might look like. Right now the barges are topped with nothing but shipping containers, but, when all the work is done, it will be flanked by sails that give off an imposing aquatic personality to serve as a reminder to visitors of its seaworthiness. As if being surrounded by a mass of water with the smell of the sea riding on the wind and having that floating sensation won’t be enough.

The document also mentions that the barge will serve as temporary technology exhibit spaces, in line with Google’s own statements, and will be able to host up to a thousand visitors as it stays moored at different locations on the bay for months at a time. As to why Google has to build it on a floating barge instead of something on solid ground is, for now, still anyone’s guess.

SOURCE: SFGate
VIA: The Verge