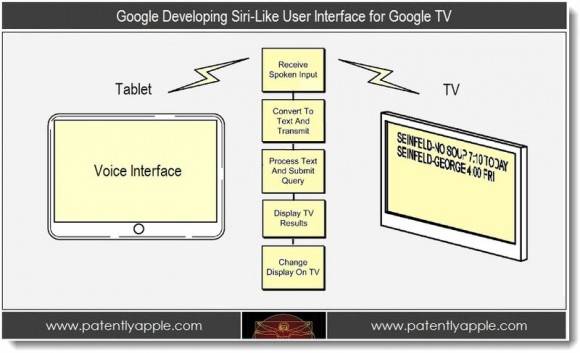 Google has some big plans for Android and our homes. With lots of discussion lately of a Android@Home project under way and more we are now seeing some information that Google has applied for a patent to bring Voice actions and Siri-like voice controls to our living rooms and Google TV. Put down that remote, let Google and Android do everything for you.

It is nice to see Google taking the patent route on many of these things and innovations so they don’t get attacked later by certain competitors. According to PatentlyApple Google has applied for this patent and have some big plans for Android and Google TV. Imagine being able to control everything with your voice. It appears the patent was applied for around the same time as the iPhone 4S and Siri launched (before it on September 29, 2011) so that shouldn’t concern many users. Google wants users to interact naturally with their TV’s saying things like, “When is Seinfeld on?”

Being that it will use the Google Cloud services you wont even have to be in close proximity of your Google TV. Turn on the TV and set it to Sportscenter from the other room, turn on that Barry White music before you get home with a hot date — the options are limitless. Another Key feature since we are using Android devices here, is the option for the user to select pre-defined actions with GPS. Your phone could turn on the TV set when you get close and are 1/4th mile from your house and more.

I want it, and I want it now! Obviously this could be something we see plenty more of in a few months from Google at Google I/O 2012. Check out the links below for more details on some of Google’s secret projects or plans.