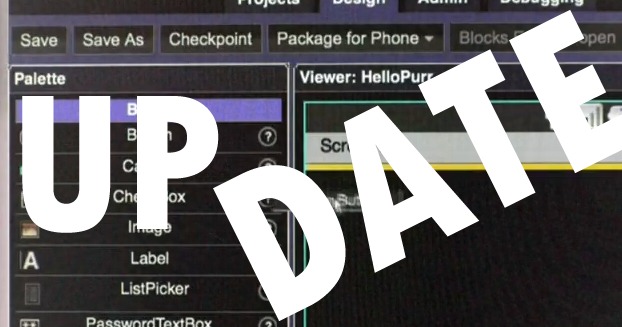 It’s update day over at Google’s App Inventor office, and the list of improvements is a LONG one. For those not in the know, App Inventor is an application created by Google to assist developers in creating apps for their Android mobile OS. This application allows users to create apps in as simple as a drag-and-drop type manner, creating an environment where it’s not only easy to create apps, it’s totally fun as well! Behold a big fat update!

This application is relatively new, having only been released publicly in December of 2010, its most recent build still being labeled Beta. To take a look at this app for yourself, head over to http://appinventor.googlelabs.com/about/ and grab a download totally free. For those of you who already know what’s going on in the world, read on:

The following is a big fat giant list of improvements they’ve made to the most current build of this application for creating apps, most of them “fixes” but a few of them “adds” – like infinite scrolling in the vertical dimension so you can shrink to fit! What’s more exciting than that? The following is a note from App Inventor representative Mark Friedman:

We’ve updated App Inventor with a set of new features and bug fixes.  Please  note that you should reload your browser and restart any blocks editors.

We have one known issue that is introduced in this update that will be fixed
in the next release:
• Checkboxes are formatted incorrectly in the UI designer under some circumstances.  Note, though, that they should display correctly on the phone/emulator.

These are the new features and fixed bugs:
• Add methods DrawText and DrawTextAtAngle to Canvas.  To support this, we added the properties FontSize and TextAlignment to Canvas
• Add runtime type checking to the start, end, and step args in for-range.
• Add PointTowards as a method for sprites.
• Add SelectionIndex property to ListPicker.
• Allow “infinite” scrolling in the vertical dimension just as there is in the horizontal dimension and provide a user-selectable “shrink to fit” option to resize the blocks editor to fit the blocks currently placed on it (in it gets too big).
• “Packaging” indication is now shown in the Packaging button, rather than the message area at the top of the UI designer.
• Fix nastiness that occurs when users enter non-numeric characters as the values of numeric properties in the UI designer.
• Fixed bug where Screen1.Initialize causes Screen1.width and Screen1.height to report values of zero when app is packaged.
• Fix bug that produced an error message if you drag a block from a drawer straight to the trash.
• Fix type-blocking.
• Fix key bindings for copy/cut/paste of text in text areas on Mac. Both CTRL-C/X/V and CMD-C/X/V now work to copy/cut/paste on Mac.
• Fixed some bugs related to image quality and image size reduction
• Fixed loading images via URL
• Fixed bug where text-to-speech doesn’t trigger it’s afterspeaking event
• Prevent infinite recursion in Sprite.MoveIntoBounds
• When a component is deleted, tell the component’s property editors to stop listening for events.
• Allow Screen1.Scrollable property to be set from blocks.
• Make upcase to work better in non-english character sets.
• Fixed problems related to getting bad errors when setting some properties to None.
• Fixed a problem where an IllegalArgumentException could happen when loading a project with any of the LEGO MINDSTORMS NXT components
• Hide “Uploading