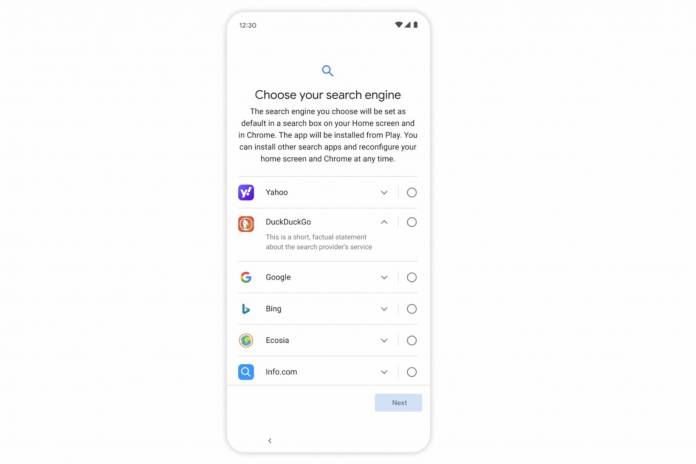 To make good with the European Commission and to comply with the antitrust ruling against them back in 2018, Google had to give users a choice for their search engine, at least for those who will be setting up their Android devices in Europe. Upon further discussions with the Commission and feedback from users, they are now making some changes to the Choice Screen by adding more search providers to choose from. They are also making participation free for eligible search providers.

To comply with the 2018 antitrust ruling against them, Google introduced the search engine “choice screen” last year where users can choose their default search engine. Most Android devices already have the Google search box on their homescreen but the European Commission ruled that this was unfair to other search engines of course. What showed up in the choice screen depended on the country and there was an auction system where “search providers will state the price that they are willing to pay each time a user selects them from the choice screen in the given country.”

But upon further discussions with the Commission, Google is making “final changes” to the Android Choice Screen. There will not be a fee anymore for eligible search providers and up to 12 options will appear for the users. It will be a single, continuous, scrollable list that will be both randomized and tiered. The five most popular in each country according to StatCounter will show up first at the top but randomized. The next tier will be the seven remaining eligible general search services.

While participation is now free, there is still an eligibility criteria for search engines. First, it has to be a general search provider and should let users search across the entire internet. Second, it has to provide local language support in the country where they’re applying to participate. And of course, they must have an app available in Google Play and that they provide Google with the necessary technical assets.

The changes to the Android Choice Screen will take effect in September for Android devices in the European Economic Area (EEA) and the U.K. The search engine that the user chooses will get the search provider in the home screen search box and will be the default search provider.