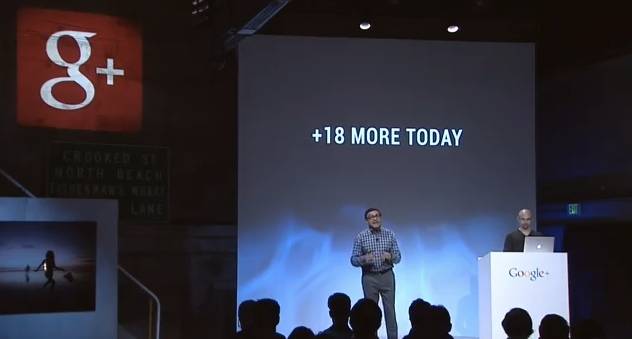 While Google added some new features across Hangouts and for Photos, they began the event with some numbers. Specifically, Vic Gundotra began the “Morning with Google+” event with a section called Momentum. Basically, this was an update on Google+ itself, which offered the reminder about how Google+ opened to the public in September 2011 and how Google ships a new version “almost” every day.

With that in mind, there was talk of how there have been 20 updates since this summer. Those included the replacing of YouTube comments and also brought translations. And as of today, there is going to be 18 new features announced. Those new features will span across Hangouts and Photos and includes SMS integration on the former and more auto-awesome magic on the latter.

Getting back to the numbers though, Gundotra mentioned how the “product momentum has lead to the growth of Google+.” Basically, this goes to the number of new features that are being added and the number of new users that are coming. There was mention of how at Google I/O there was 390 million 30 day active users across Google (signed in via Google+). As of today, that number has grown to 540 million.

Alternatively, there was mention of Google+ now having 300 million active users in the stream. Gundotra described this as being the “core social experience” and said the growth has been “fantastic.” While there wasn’t any numbers in regards to Hangouts, there was an image related number. That number was 1.5 billion, which is the number of images that are being uploaded every week.

Otherwise, Google+ fans will be happy to hear that Vic Gundotra closed the event by saying thank you and with the promise they will continue to innovate. And lastly, as we often see, a video of the event has been posted on YouTube (which you can see sitting below).