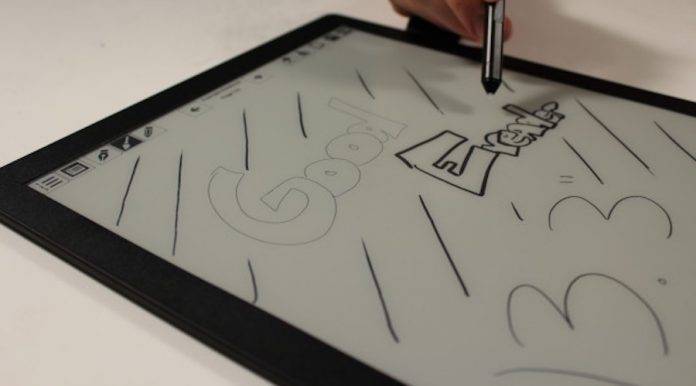 Remember the Good e-Reader tablet that was introduced last year? In case you didn’t know, the device described as the “ultimate e-reader” has been available for some time now. The large tablet which began as a crowdfunding campaign captured our attention because of its size–13.3-inches. Screen is large for a tablet that is mainly used an e-book reader.

Good e-Reader features an e-ink screen but that is already high-resolution. It also comes with finger and pen touchscreen input so you can also use a stylus to control and navigate. The tablet is powered by Android so we can expect Google Play Store support although we have a feeling that apps that can run will be limited. We’ve already heard issues about accessing Google Play so we’re not yet confident about it in that aspect.

The eReader is still listed on Indiegogo. Device costs $729 which is pricey for such limited features. We’re not sure though how fast you can quickly receive your tablet because some orders from September last year still haven’t shipped. Note that the Good e-Reader is simply a rebranded Netronix ED0Q02 which is a tablet that runs old Android 4.0 OS. Device is also now available for $769 on Amazon.

To review, here are the specs of the Good e-Reader: 1600 x 1200 pixel E-Ink Mobius screen, 512MB RAM, 4GB onboard storage, Freescale i.MX6 SoloLite processor, SD card slot for expanded storage (max of 32GB), and a 1270mAh batt. Battery capacity may be small but it’s already good enough to last up to one month.

The tablet comes with a stylus pen that can support 1024 levels of pressure sensitivity, making it ideal as a digital sketchpad. Feel free to write notes on your e-books as if you’re writing on real paper.