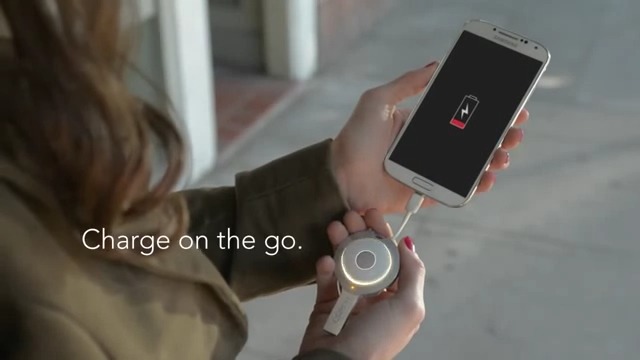 Portable battery charger, USB cable, flash drive, keyring. These are just some of the disparate things you carry around in your bag and pocket. But what if you could all bundle them together in one, handy, unobtrusive keychain? That may soon be a reality when and if this GOkey crowdfunding campaign comes to fruition.

GOkey sounds like a smörgåsbord of features, so let’s dissect them one by one. First, it is an emergency portable charger. Not enough to fully charge your power hungry smartphone, but its makers claim it can keep it running for 2 hours at most. Second, it is a charging and data cable. You can connect your smartphone to a computer to both charge it and transfer files. GOkey charges itself in this mode, but you can also plug it in to a wall charger for faster charging times. Third, it is a USB flash drive, letting you stow away your files in 8, 16 or 32 GB storage options. And lastly, it is a Bluetooth-enabled locator, letting you either locate your keys, or anything attached to GOkey, via the mobile app, or reversely, locate your smartphone at a press of a button. And yes, GOkey is also a fancy keychain. 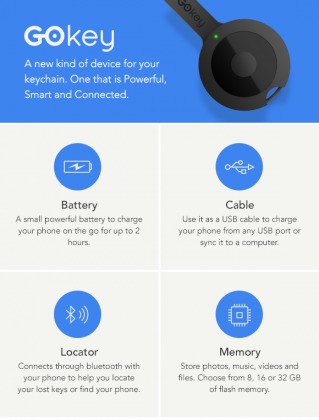 There are a few caveats to this almost perfect little accessory. The battery capacity is capped at 400 mAh, which sounds a bit low. The exact output rate isn’t given, which is sometimes a determining factor whether some devices will actually get charged or not. The locator feature also isn’t exactly simple. Although the effective radius is said to be 100 m, finding the GOkey using the smartphone app is like a game of Marco Polo. The app will indicate how near or far you are from GOkey and, when near enough, can be used to trigger an audible alarm on the key. A more accurate GPS locator feature is also being considered, but only once the $500,000 stretch goal is met, which actually isn’t that far now.

The Indiegogo campaign has already managed to net almost $440,000, which is like 1000% of its original goal of $40,000. The device itself isn’t actually made yet and the funds raised will be used for manufacturing. GOkey is indeed a very interesting device that seems to have lots of supporters and believers. But one should always be aware that even successful crowdfunded project may end up failing to deliver.