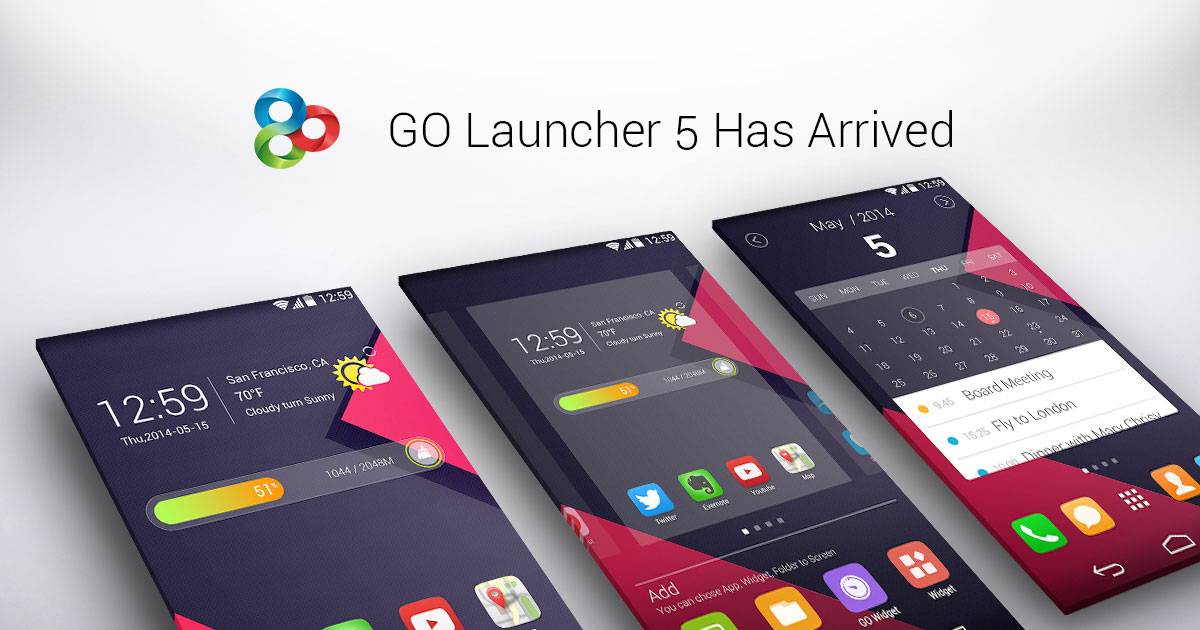 After much teasing and countdowns, GO Launcher has finally unveiled the latest version of this popular homescreen replacement. With GO Launcher EX 5, the app switches over to the flatter aesthetic of KitKat and the buttery smoothness of its own 3D graphics core.

More than anything else, GO Launcher 5 is a visual refresh, bringing its own widgets, icons, and design to match the flat, minimalist, and colorful tastes of Android 4.4. This is, of course most evident in the icons that GO Launcher uses for its settings, but it can also be felt all throughout the home screen and the app grid. Even the widgets that officially ship with GO Launcher have been updated to that same visual identity. Of course, there are other behavioral new features as well, like the side navigation panel in the Apps grid, which gives users access to Widgets, GO Launcher’s own App Manager, and a new Hide App section.

When it teased its upcoming version upgrade, GO Launcher mentioned bringing in some smarts. This, however, apparently didn’t mean the same level of intelligence as other “smart” learning homescreens. It mostly came in the form of Smart Cards, basically just tips that popped from below here and there to offer timely and relevant tips.

In almost everything else, GO Launcher remains the same, only better. You get the same penchant for sometimes over the top transition animations. You also have access to GO Launcher’s own market ecosystem, which covers everything from widgets, themes, and even apps. All in all, you still get everything you may have enjoyed in GO Launcher, the freedom to configure and customize your homescreen just the way you like it. Only now everything is prettier to look at, at least by default.

There are actually many more new features, but most of them are hidden behind the paid Prime version. This includes things like ad removal, new transition animations, more gestures, a side dock, and even a very useful security lock to keep some apps private. The Prime version will cost you $5.99, either from Google Play Store directly or via in-app purchases. If, however, you do not need any of those features, then the free GO Launcher EX 5 might be enough for you.