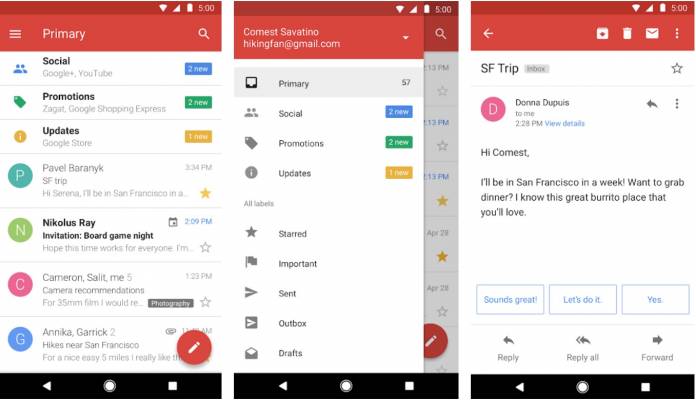 Gmail Go is Google’s lite version of their popular email app. But previously, it was only available on selected countries where Android Go is available, particularly the ones where internet connection wasn’t always that great or those that needed to save up space and memory on their devices. It seemed like the Go version was going to be available already for everyone but then hours later, the app didn’t seem to be available anymore. Whether it was a mistake or they were found something wrong and had it pulled, but it looks like the app cannot be downloaded anymore.

Google has been releasing Go or lite versions of their apps so that those who still want to use the apps but they may have lower-powered devices that will not be able to handle the full versions. Gmail Go is still very much a functioning email app with the same core features except that it’s not integrated with Google Meet so there’s no bottom bar plus the UI is “lighter”. The app is optimized for basic screens so if you’re using it on a device with a higher refresh rate, it will “stutter” every once in a while.

The Gmail Go app was introduced in selected markets only but suddenly, users found out they could download it from the Google Play Store. And so we thought it was finally available for all markets. But after 24 hours, some who were trying to download it found the “Your device isn’t compatible with this app” warning on the app page. This may mean that it wasn’t originally going to be released but someone pressed the button or they found a glitch that they’re now trying to fix.

In any case, there’s no official word yet from Google either way so if you were looking forward to downloading the app for your device, in case you’re running out of RAM then you’ll probably have to wait a little while longer. But if you are a Gmail power user anyway, then this version should be no good for you so it won’t affect you anyway.

If you’re in a country where Android Go and other Go apps are available, then you should probably be able to download Gmail Go. So go ahead and save up some space on your device and you can make do with a basic version of the email app.