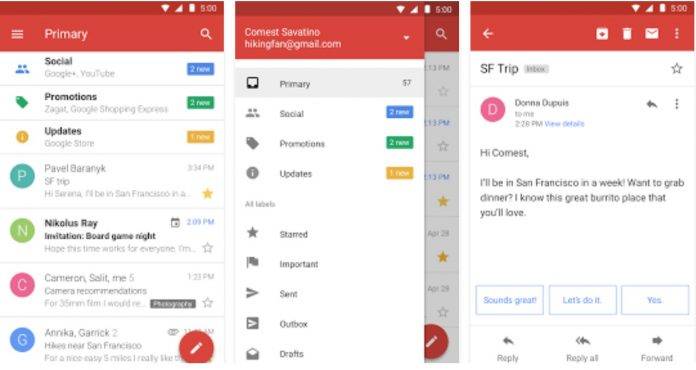 As we wait for the Android Oreo (Go Edition) to come out, slowly Google is releasing all the members of its Go app suite. The latest one to become available for Android devices running on Oreo 8.1 is Gmail Go. And just like its other co-Go apps, it’s a lightweight version and is intended for low-end devices that have limited memory and internal storage. Despite being a lite version, there are still a lot of things that Gmail Go can do for you.

Looks-wise, it’s similar to the earlier version of the regular Gmail app and has all the basic features like an inbox that prioritizes emails from contacts and separates social and promotional ones. It also has multiple account support even for non-Gmail addresses like Yahoo, Outlook, IMAP/POP email accounts. And you get to view your emails in the conversation view that you’ve probably gotten used to on your desktop and the full version of Gmail.

This is part of Google’s push to be more available in countries that may prefer devices with lower memory and where the Internet speed is not that fast. Other Go apps that have been recently released include Files Go, Gboard Go, Google Go, Maps Go, and YouTube Go. Gmail Go also blocks spam even before it goes to your Inbox, but of course you won’t be able to see those that were accidentally marked as spam.

Gmail Go’s file size is just at 9.51 MB and will take up around 25MB of space on your device, as opposed to the full app’s 20.66MB download size and 47MB storage space needed. It also uses less RAM of course and load images only when you want them to. It’s available in limited territories for now and your phone needs to be running on Android 8.1 Oreo.