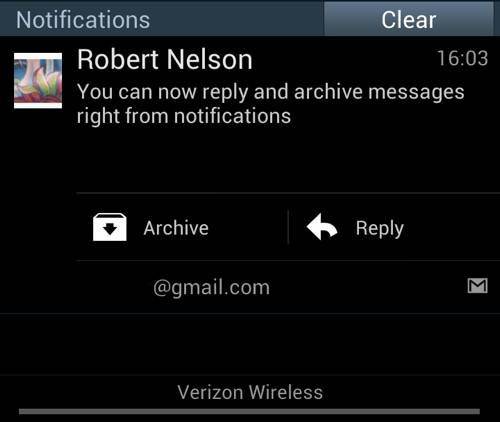 Beginning first with the goodies for Jelly Bean users. These deal with the notification shade and are rather simple. They are also rather convenient. Basically, those running Android 4.1 will now be able to reply, archive or delete a message directly from the notification shade. In other words, moving forward less opening of the Gmail app will be required.

Finally, those running Android 2.2 or later also have some unspecified performance improvements. Those with Android 2.2 or later also have a new labels API available for third party app developers. All said and done, while it seems that Jelly Bean users got the best deal here, it is nice to see Google paying attention to the older versions as well. With that, those with an Android device in hand should launch the Play Store on their device and proceed to update.