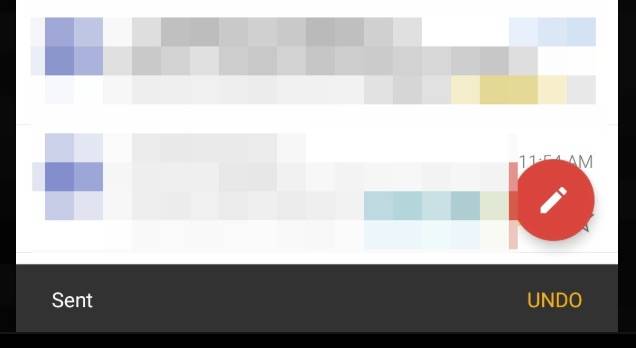 Those who use Gmail on their desktops or laptops have been enjoying this feature called “unsend emails” which has maybe saved our faces and reputation by doing what its name says. But if you use the Android app version, you will have to live with yourself if there was a mistake or there was something missing when you sent that email. Now it looks like Google has finally started rolling this out to mobile users, much to the relief of those who are prone to make email-related mistakes.

Whether you accidentally sent sensitive information or you sent an email to the wrong person, email gaffes are now easier to correct if you’re using the Gmail for Android app and if you’ve updated it to the latest version. If you realized the mistake split seconds after you sent it, you can see a cancel button underneath next to the sending button. Tap on cancel and you’ll go back to the email draft that you’re working on and you can either correct the wrong information or just delete the email altogether.

If you’ve already sent the email, you will see an Undo button right beside the Sent at the bottom of your screen. Tapping Undo will do just that and your recipient will not see the email and you’ll be brought back to the composition screen where you can choose to edit the email or save it to draft or just get rid of the “incriminating evidence” of your mistake.

However, you only have a few seconds of course to retract that and if you don’t see the undo button anymore, your window has passed and you’ll have to save face the old school way. There isn’t an exact time window as to how long you have but it’s just a few seconds so you better have quick reflexes.

There wasn’t an official announcement from Google as to when this started rolling out, but update your Gmail app to the latest version which should be 8.7+. Or you can force close your app and when it re-opens, the option might be there already. If not, just wait for it to reach you and in the meantime, be careful with what you send.