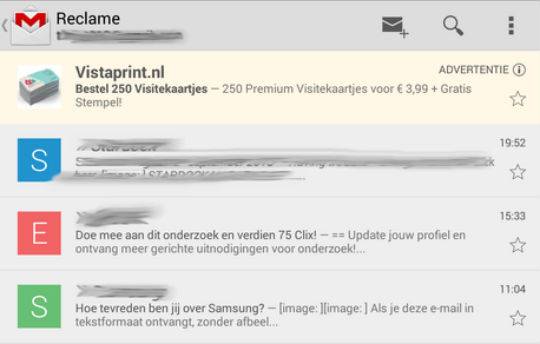 When Google changed the GMail interface for Android, we mentioned it could be to allow for advertisements to make an appearance. Quickly dismissed as they are, mobile GMail advertisements make a lot of sense for a company who relies heavily on them for their massive revenue stream.

It appears that the ads have now begun making an appearance, with Dutch site Android World noting they’re present in the Android GMail app. They are running the current version, and the ad is prominently displayed at the top of the stream. We’ve not yet heard of ads in GMail for Android being stateside yet, so it could be a country-by-country rollout.

There is also no known method for turning the ads off. The settings for the desktop version can be altered to remove the banner ads above the inbox, and you can choose not to see the “Promotions” tab, but there is no visceral way to remove all ads. A few Chrome extensions promise to clean them away, but that doesn’t help us on mobile.

We can only hope that Google will be responsible about mobile ads in GMail, and not inundate us with anything. The Dutch translation for Reclame is “advertisement”, so it seems this is all currently relegated to the Promotions tab. Let’s hope it stays that way.