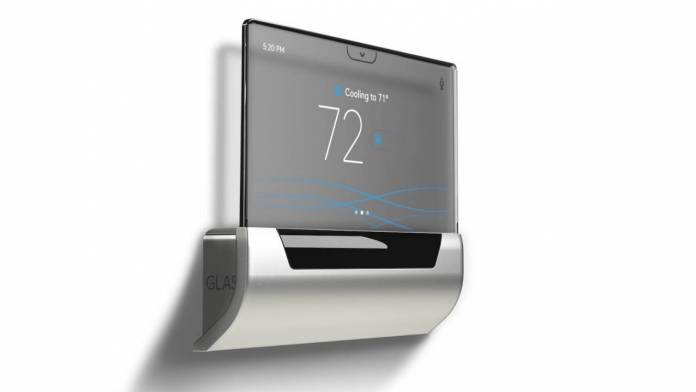 Smart thermostats are a thing. We know quite a few smart thermostats like the Honeywell Wi-Fi Smart Thermostat, Ecobee, Ecobee3 Lite, Honeywell Lyric, and the Nest Learning Thermostat. There’s also the GLAS smart thermostat that features Cortana. We don’t know much about this GLAS but it’s the largest expansion of Cortana in the smart connected home game. So that’s why we never heard of the device. It’s powered by Cortana which isn’t widely used. Now there is information the device is ditching Cortana for Google Assistant and Amazon Alexa.

The GLAS smart thermostat is a beauty with is glass touchscreen. It gives a futuristic vibe and looks really nice on the wall. No doubt it can capture your attention. You’d think you’re really living in the future.

But the success of a device doesn’t just depend on the aesthetics. The system that runs it is important. It features Cortana for an efficient smart home control but sadly, it will be removed soon.

GLAS runs on Windows 10 IoT Core. There will be a major change as Cortana support will be no more. An official notification has been sent to GLAS thermostat owners, saying: “Soon, your GLAS smart thermostat will go through a software update. The Microsoft Cortana voice assistant will no longer work on your device. Moving forward, you will still have access to other voice assistants to control your thermostat through the Works with the functionality of Amazon Alexa and the Google Assistant.”

It’s not at all bad news. In fact, others may be happy with the news because the Google Assistant and Alexa are more popular and more widely used. Such integrations will do good for the makers of GLAS.

GLAS smart thermostat has received Alexa and Google Assistant updates before pre-orders were taken. The absence of Cortana may not affect sales much because the two from Amazon and Google are more favored.