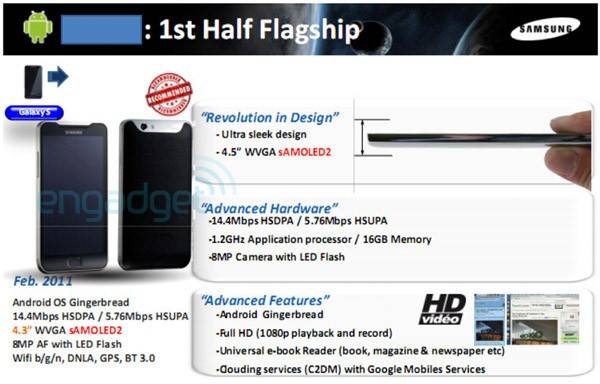 So our pals over at Engadget have been given a “1st Half Flagship” deck image here with some rather interesting news on it. It appears to be a giant phone with “ultra sleek design”, running Android (2.3) Gingerbread, and toting either a 4.3″ or 4.5″ WVGA sAMOLED2 screen. The guesses appear to be that the little s before AMOLED2 might mean SUPER, and it’s unclear as to why two different screen sizes are listed on the same page. The phone boasts 1080p playback and recording, it’s a “Universal e-book Reader,” and it’s got a massively awesome 8 Megapixel photo camera with LED flash.

Inside the phone you’ll find 14.4Mbps HSDPA / 5.76Mbps HSUPA, some sort of 1.2GHz core and 16GB onboard storage. The fact that the screen might be SUPER implies that Sammy has made some improvements and advancements over the screens that have appeared on Galaxy S models this past year. This phone looks like a really freaking neato piece of machinery, and if the Nexus S flood of information today is any evidence, expect lots of news about this new phone to come much sooner than later. Excitement!

UPDATES: There’s a tiny inconsistency with the image of a hand holding the very thin phone in that this is actually an image of a VoIP handset by Apiotek, but this can be explained the fact that this presentation pic could have been thrown together quickly and pre-available images of such side-views as well as a quick Google image search of the term “ultra slim phone” (thank you again Engadget.)

Next, a new image is available that shows Google Serives, Google C2DM Service, an Astonishing Web Experience, Readers Hub, and a Full HD Experience (with the same 8MP Camera and 1080P Recording stats from the first image.) It also shows a larger image of what appears to be the final (or working) model of the phone.

Finally, there’s a name being attached to the phone, “Samsung Elite,” but this seems unlikely simply due to the fact that that name is already taken.