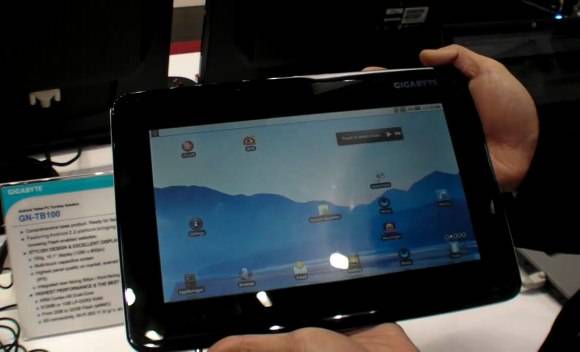 Gigabyte has quietly announced its intention to get into the Android tablet market, bringing the GN-TB100 along to CeBIT 2011 this week. A 10.1-inch Tegra 2 slate with a 1280 x 800 resolution display, 5-megapixel rear camera and 1.3-megapixel front camera, and integrated 3G, the Gigabyte GN-TB100 will arrive in July 2011, according to what the company told ARMDevices.

It may have some aesthetic changes before then, but inside is expected to be 512MB or 1GB of RAM, up to 32GB of storage, WiFi b/g/n and Bluetooth 2.1. Ports include HDMI and mini-USB. Gigabyte is making much of its IPS display, which is higher resolution than the iPad’s screen, though we’re hoping they replace the Android 2.2 Froyo OS the slate is currently running with Honeycomb by the time it reaches shelves.