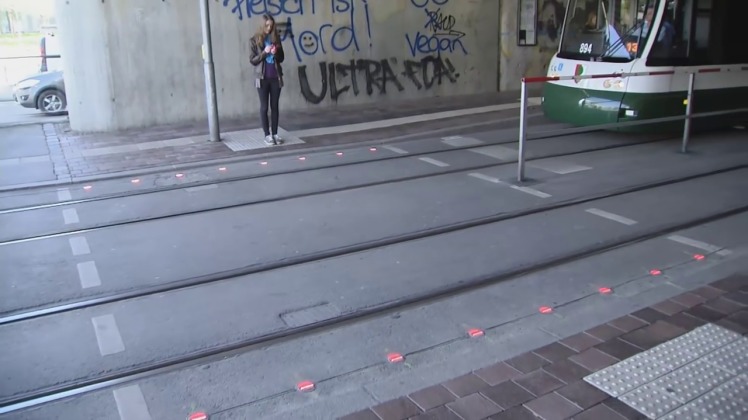 No, that is not a type and there isn’t an outbreak of zombies in the German city of Augsburg. What they do have is an outbreak of “smombies” or smartphone zombies whose eyes are glued to their device while they’re walking or even crossing then street. This has led to several accidents and near-accidents as they are not paying attention to their surroundings. So what the city has done is to install floor traffic lights so you can still be warned about impending trams or buses even while you’re staring at your mobile device.

No matter how many times people are warned about the dangers of looking at your smartphone while walking along busy streets (or any street for that matter), there will still be those who can’t help it, either because they’re lost and need to consult their map, or what they’re posting on Facebook is just too darn important. But either way, Augsburg has determined to just help out these smombies by installing floor traffic lights to warn them that a tram is approaching if it flashes red. And since it is almost at the eye level of smartphone reading people, they should not miss it.

These lights have actually been in operation in two tram stops since Tuesday. The problem is that during evenings, it is pretty visible but in daytime or when the sun is still out, people might still not notice them. In fact, one of the teenagers interviewed by a local news channel said that he didn’t even notice they were there until it was pointed out to him.

While it may seem like a ridiculous thing, people have actually died or been seriously injured from all this not paying attention to your surroundings. While the best solution would be to actually just stop using the mobile devices, inventive solutions like this can also help mitigate these occurrences.