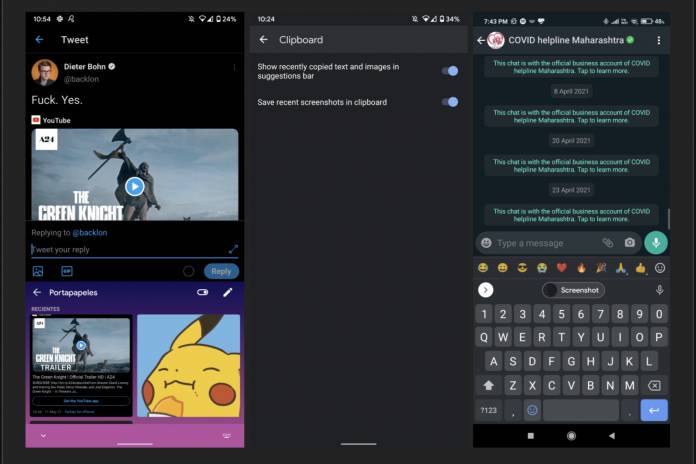 The clipboard feature on Gboard is one of the most useful additions to Google’s virtual keyboard as it gives you easy access to text and images for easier copying and pasting on your mobile device. Now they seem to be adding screenshots to the clipboard as well. This means that if you enable this feature, all the screenshots that you take on your phone can be accessed easily on the clipboard so you can insert a screenshot wherever you need it.

Android Police shares this new feature that has been spotted on the beta version of Gboard. Users will receive a prompt from Gboard, asking if you’d like to add screenshots to your Gboard. If you do agree to turn it on, all of the future screenshots that you take on your mobile device will be automatically added to it. With just a few taps, you’ll be able to add the screenshot that you need to whatever conversation you’re having using the virtual keyboard.

If you don’t turn it on from the prompt, you can always change your mind later on. You can turn it on and off on the settings of Gboard under clipboard. Some apps will also show you the suggested paste button so you can insert the screenshots with just one or two taps. And when you’re on your mobile device, the fewer taps to finish your tasks, the better. And that’s one of the things that the clipboard feature does.

Just last week, Wear OS added support for the Gboard app so you can use the virtual keyboard on your supported smartwatches. But it’s been a while since Google updated the Gboard app itself with substantial new things. The last time was last December when the beta version got a new font and a new look and the Emoji Kitchen got thousands more emoji combinations. It’s probably one of the best apps from Google so hopefully, we get new things from it too.

The screenshot addition to the clipboard is only available for the latest beta version of the Gboard app but it’s a server-side update so it’s no guarantee. No news also when it will roll out to the stable Gboard app.