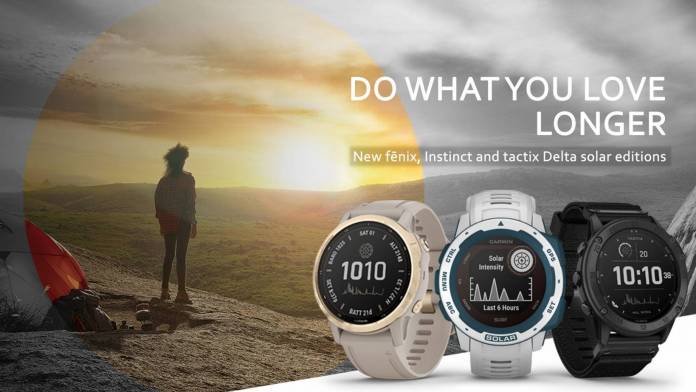 One common complaint with smartwatches is that if you’re a heavy user, you almost probably spend a lot more time charging it on its cradle than wearing it on your wrist. While the battery conundrum is still unsolved at this time, there are some that are trying to find ways to extend battery life. Garmin is now launching variants of some of its more popular adventure smartwatches with the addition of solar panels so you can charge them even while they’re on your wrist.

The Fenix 6S and the 6S Pro both get solar-glass lens over their dials. For the former, you get an additional 1.5 days out of the battery “with sufficient solar exposure” aside from the 9 days indoors. The latter will be able to add two more days to its 14-day battery life if you’re outdoors and get enough sunlight. Aside from the solar panels, they also get new modes for surfing, mountain biking, and indoor climbing. Plus you get an Acclimation Widget if you’re planning to climb a mountain soon.

The Instinct line of smartwatches are also getting solar-powered upgrades with the Instinct Solar, Instinct Solar Surf, and Instinct Solar Tactical Editions. Garmin claims that if you activate its Battery Saver mode, it will be able to last “almost indefinitely” even if you don’t charge it. But of course if you use them in other, more intensive modes, that will not happen. But the 50 days in smartwatch mode is still pretty great, compared to other wearables.

Garmin also has a military-grade device, the Tactix Delta, and with the solar-power upgrade, it will be able to last for 24 days if you get enough rays in. This is a slight improvement from the 21 days as a smartwatch (60 hours in continuous GPS mode) so it should be something those who are on active duty should be able to utilize.

The suggested retail prices for the devices start at $399.99 for Instinct Solar, $849.99 for fēnix 6 Series – Solar Editions and $1,099 for the tactix Delta – Solar Edition. They say the solar-powered variants are now available for sale so you can head over to Garmin.com.