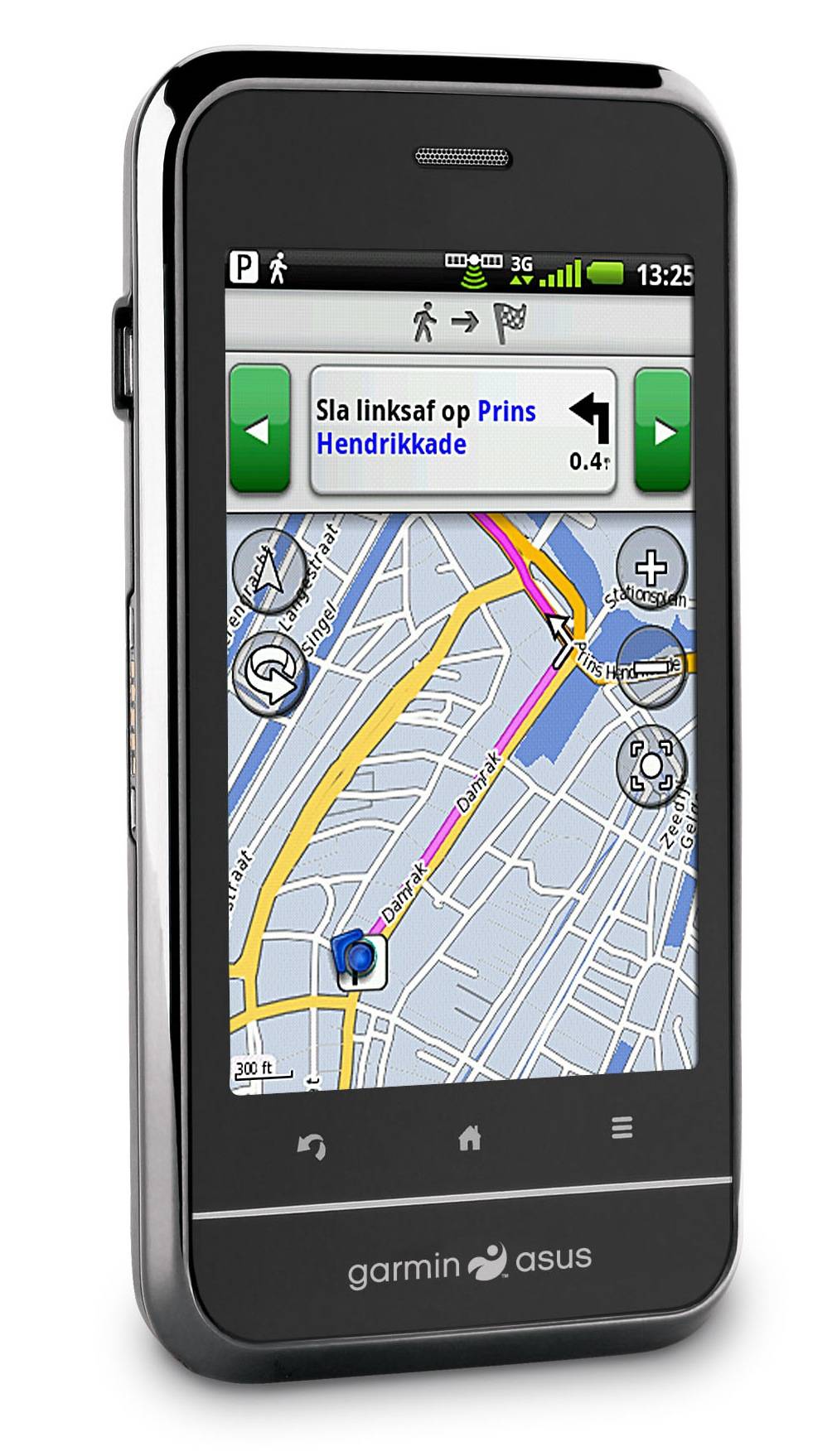 Garmin-Asus’ latest Android smartphone has been outed, the 3.2-inch HVGA nuvifone A10.  Targeted at pedestrian navigation users, the A10 obviously comes with GPS but Garmin-Asus also preload mapping data onto the handset rather than leaving it to the whims of the cellular network while you’re on the move.

There’s also a 5-megapixel camera with geotagging support, an accelerometer and a 1,500mAh battery; Garmin-ASUS don’t actually suggest how long that will last you while navigating.  In the box there’s an in-car windscreen mount that both recharges the smartphone and has a speaker for amplified voice guidance prompts.

The usual Android apps together with Microsoft Exchange support are loaded, and there’s the Android Market too; no word on whether the screen is capacitive or resistive, but it does support multitouch.  The Garmin-Asus A10 will go on sale in Europe and Asia-Pacific midway through this year; no word on pricing at this stage.

Update: Garmin-ASUS have announced that Dutch carrier KPN will be the first to offer the nuvifone A10, taking preorders in May with deliveries expected in July.

Cayman Islands/April 28, 2010/Business Wire — Garmin-Asus, a co-branded alliance between Garmin® Ltd. (NASDAQ: GRMN), and ASUSTeK® Computer Inc. (TAIEX: 2357), today announced the Garmin-Asus A10, a touchscreen smartphone running on the Android™ platform that is optimized for pedestrian navigation. The A10 is expected to be available in mid-2010 in Europe and Asia-Pacific.

For those times when walking is the best way to go, the A10 is ideal for city navigation because of its bright, 3.2-inch HVGA touch screen, electronic compass and long-lasting 1500mAh battery. As with other Garmin-Asus Android-powered devices, the A10’s GPS capabilities are optimized to ensure that customers have the best location and navigation experience a smartphone can offer. Detailed maps are preloaded on the A10 so that users do not have to pay and wait for third party maps to download from a server, nor will they lose their turn-by-turn, voice-prompted navigation if they are out of cell phone coverage. In addition to pedestrian navigation, the A10 is ready for use in an automobile out-of-the-box, and it comes with a powered audio mount that magnifies the volume of the device’s voice commands.

The A10 is a full-featured smartphone on the Android platform that integrates Google™ Mobile Services with one-click access to Google Maps™, Gmail™, YouTube™, calendar, contacts and Android Market™, where users can find more than 30,000 applications to expand and personalize their phone to fit their lifestyle. Android applications that include location-centric content are also able to utilize the A10’s enhanced GPS capability.

Additional A10 smartphone features include a powerful WebKit browser with multi-touch,
five mega-pixel camera including auto-focus capability that automatically geotags images with an exact location reference. The built-in accelerometer will quickly change the display so that screens may be viewed in portrait or landscape mode.

The A10 also supports optional cityXplorer™ maps, which makes it possible to plan and use routes that include public transit options such as bus, tramway, metro and suburban rail systems.

The Garmin-Asus A10 is expected to be available in mid-2010 in Europe and Asia-Pacific. Additional information about Garmin-Asus products is available at www.GarminAsus.com.

About Garmin Ltd.
The global leader in satellite navigation, Garmin Ltd. and its subsidiaries have designed, manufactured, marketed and sold navigation, communication and information devices and applications since 1989 – most of which are enabled by GPS technology. Garmin’s products serve automotive, mobile, wireless, outdoor recreation, marine, aviation, and OEM applications. Garmin Ltd. is incorporated in the Cayman Islands, and its principal subsidiaries are located in the United States, Taiwan and the United Kingdom. For more information, visit Garmin’s virtual pressroom at www.garmin.com/pressroomor contact the Media Relations department at 913-397-8200.

About ASUS
ASUS is a leading company in the new digital era, with a broad product portfolio that includes notebooks, netbooks, motherboards, graphics cards, displays, desktop PCs, servers, wireless solutions, mobile phones and networking devices. Driven by innovation and committed to quality, ASUS designs and manufactures products that perfectly meet the needs of today’s home and office users. ASUS won 3,268 awards in 2009, and is widely credited with revolutionizing the PC industry with the Eee PC™. With a global staff of more than 10,000 and a world-class R&D design team, the company’s revenue for 2009 was US$7.5 billion. ASUS ranks among BusinessWeek’s InfoTech 100, and has been on the listing for 12 consecutive years.