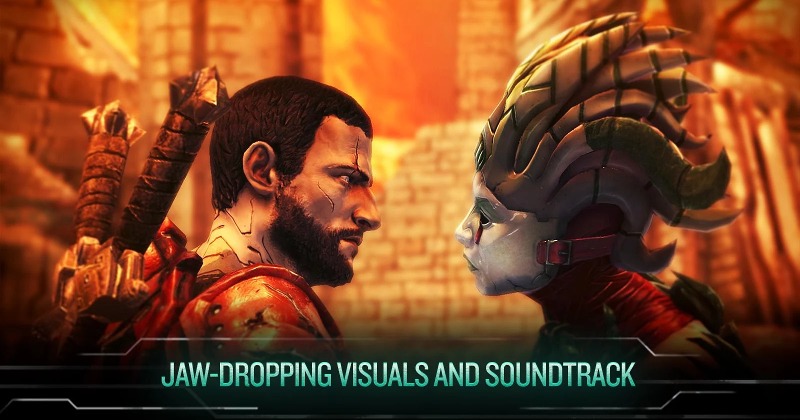 It’s Friday again, which means weekend, which means games! At least for the gamers and would be gamers in the crowd. And just our luck, quite a number of new titles, some of them quite high profile, have descended upon us just today to delight, frustrate, and hopefully entertain us. Welcome to Android Community’s Games Roundup for December 5, 2014.

While we love Android to death, there are only a few games that gives that “wow!” feeling, especially when it comes to graphics. For iOS, that game was Infinity Blade and its luscious graphics. For Android, Godfire: Rise of Prometheus might just be it. Delivering almost console-level graphics, the game doesn’t skimp on using your device’s resources, so you better have some beefy specs in your hand to enjoy this treat. It has a theme reminiscent of God of War, and the amount of action and gore can be likened to it as well. Of course, unlike God of War, you are left with only a touchscreen and no controller support, though that one is coming, they say. Attacks are all tap-based and there are some timed attacks that you need to make during those dreaded quick time events.

Godfire: Rise of Prometheus is surprisingly free on Android, considering it has a $2.99 price tag on iOS. There are, however, in-app purchases, so be on the look out for those.

This is the standalone sequel to Shadowrun Returns, a successful kickstarter game that was released for desktop and mobile gaming. If you’re tired of the age-old fantasy tropes but don’t want to go all out into sci-fi, you might fancy a visit to the world of Shadowrun, originally a pen & paper RPG, where elves might wield laser rifles and orcs can be hackers. The game isn’t exactly graphics heavy but depth of content is where it’s at. This cyberpunk-meets-fantasy game lets you build your dream team of fighters, shamans, hackers, and well, shadowrunners. Combat is turn-based, in case you need a well-deserved rest from twitch-based games.

Shadowrun: Dragonfall does carry a rather high price tag for a mobile game, but that is quite the norm nowadays for high-quality games. And RPG fans on mobile devices might very well be starving for a refreshing change in pace, quality, and content.

And speaking of quality RPGs, some say there is no school like old school and when it comes to old school, Dragon Quest is definitely one of those that take the cake. Continuing Square Enix’s expansion into mobile, the third installment of the JRPG franchise arrives on Android. Don’t go looking for 3D graphics though, as this game is squarely set in square pixels, which is admittedly part of the appeal. Like the other DQ games on mobile, DQ III’s controls are designed for a natural “smartphone” handling, portrait mode, in short.

Unfortunately, like the other DQ games, this one carries Square Enix’s usual high price tag, $9.99 to be exact. That’s the price to pay to have a piece of gaming history on your smartphone these days.

No gaming history will be complete without arcade-style fighting games, and while not exactly up there with the likes of Street Fighter, King of Fighters definitely shares a good piece of that pie. Celebrating 20 years of the franchise, developers SNK Playmore is releasing King of Fighters-A 2012 for free on Android. And without in-app purchases attached! There is a ton of new content available for this mobile version, and luckily you don’t need to make any purchase to get them. Just play through the game to gain points to unlock those content.

That said, fighting game plus mobile, you know what to expect in terms of controls. But if fighting games are your kind of thing, this is definitely one title worth having on your shelf.

For some light-hearted but still somewhat intense gaming fun, Animoca is bringing the robot boy wonder back to Android. Osamu Tezuka’s Astro Boy is flying through Android in not one but two titles. Already available now is Astro Boy Siege: Alien Attack, where Astro Boy must team up with other robots, like his robot sister Uran, to ward off an alien attack. But more than just alien thrashing, the game requires a bit of strategic thinking in getting the right robot parts for Astro Boy and his team.

Coming soon is Astro Boy: Flight, a shoot ’em up game with Astro Boy front and center. This time, evil robots are the villains and players must not only shoot them down but also avoid enemy fire in the process. Both games are free to play, but as you know, offer in-app advantages.

Thank for the tip, Matt!

These are just the new games launched this weekend but many more have landed on Android this week. Be sure to check out our Gaming portal to see our wild and varied collection of games for all types of gamers.