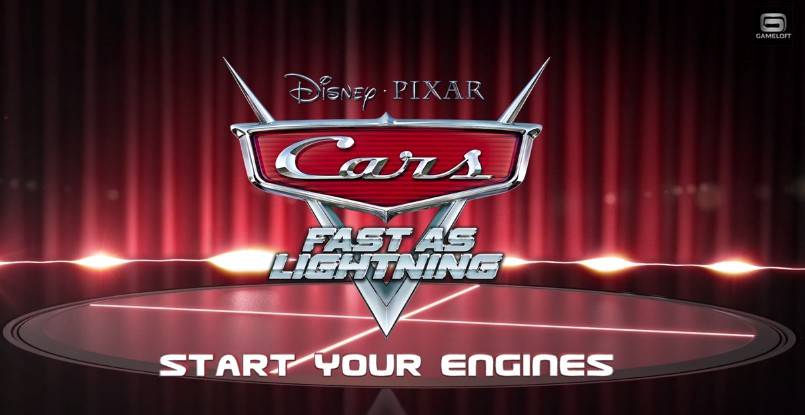 If your younger kids constantly borrow your tablet or phone to play games, but they’ve exhausted all the games you’ve installed there, you might want to consider getting this new one from GameLoft. Based on the highly-successful (well, the first one, at least) Pixar movie Cars, arriving in Android devices is Cars: Fast as Lightning, a racing game that will appeal to the young fans of the animated flick, as well as adults who like simple racing games.

Obviously, this game is all about racing, well, cars. Characters from the movie have major roles here, including Lightning McQueen (still voiced by Owen Wilson), Mater, Francesco and many more. You can choose from among 20 Cars characters, like Radiator Springs Car, Spy Car, Tuner Car and others. You can spruce up the cars with paint jobs that will make them look cool and rad. The controls are easy to learn as you loop around tracks, holding down the pedal when you want to speed up and slowing down as you ease around the corners, almost like you would in a real car.

In one mode, you can customize the tracks by adding roller coaster-like loops so you can perform daring daredevil stunts. And if you’re tired of racing, you can play the building game where you create your own Radiator Springs with 30 interactive town buildings, which features characters, buildings and landmarks that Pixar fans will recognize and enjoy. There are also animated cutscenes if you feel like just watching your favorite characters again, interacting with each other.

Now of course, you cannot expect that a game like this would appeal to adults, since its main audience are kids. But if you are a fan of Cars and you like racing games that will not make you think much, you can download Cars: Fast as Lightning from the Google Play Store for free. But it has in-app purchases so better be careful when setting your permissions, especially if it will be kids that will mostly be playing the game.