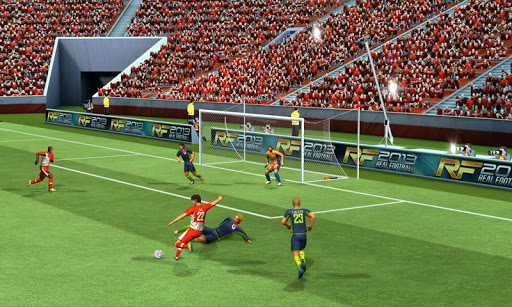 Android gamers who love Soccer are in for a treat. Gameloft has just released Real Soccer 2013 (Real Football 2013 outside the US) on Google Play for free with in-app purchases. Now, you can get your soccer on without spending a dime if you should so choose.

Last year’s game did extremely well for Gameloft, amassing over 5 million download during its lifespan. Obviously, Gameloft is hoping the sequel is equally successful. You can play the game for free, but if you get really into it, chances are you will probably want to spend some money on the in-app purchases, which is obviously what Gameloft is hoping for.

Gameloft has retained the FIFPro license for its latest game. Gameloft has personal names and portraits of over 3,000 top players because of this license. Gameloft will push updates to keep the game current with player transfers and roster changes, so your game will always be current.

The gameplay looks very similar to last year’s version. It has some slick visuals and over 700 motion captured animations to bring some serious realism to the game. It features a deep mode where you start with a rookie team and build them to the top of the league while upgrading your facilities to improve the skill level of your young players. Overall, it looks like a solid soccer game, and it’s available for free, so there is no reason not to check it out.