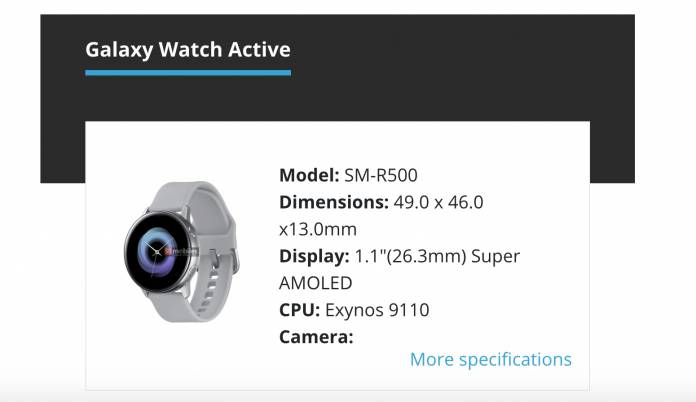 We don’t know yet if we’ll be seeing the announcement of Samsung’s new wearable but we do have some new leaks about the supposed Galaxy Watch Active, the sequel to the Samsung Gear Sport. The folks over at Sam Mobile have gotten hold of new information about the upcoming wearable, confirming earlier suspicions that we will not see a bezel ring with this one and that we will be given a smaller screen which may either be good news or bad news depending on what you plan to use the smartwatch for.

The previous Gear Sport had a 1.2” display and some found it a bit too big for their wrist and so Samsung is course-correcting here, if the leaks are true. The Galaxy Watch Active will have a 1.1-inch AMOLED display with 360×360 pixels. But more importantly, we won’t see the bezel ring with this wearable which will make interacting with the touch screen of your watch all the more challenging.

A smaller display also means you get a smaller battery and now you’ll have 236 mAh instead of the 300 mAh of the Gear Sport. The charger has also been redesigned and you’ll know reportedly get a small pad where you place the watch horizontally. This also means that the previous leak that you can charge the watch on the back of the upcoming Galaxy S10 with its reverse wireless charging feature.

There were also other previous specs that were previously leaked about the Galaxy Watch Active. It will be water-resistant up to 50 meters but what we don’t know is if it will also be MIL-STD-810G certification. It will have a dual-core Exynos 9110 chipset, 4GB of storage, Bluetooth 4.2, NFC, Wi-Fi connectivity. Since this is a Samsung wearable, it will run on Tizen version 4.0.0.3 and also support for Bixby Reminders.

Of course all these details may or may not be true so we’ll have to wait for the Samsung Galaxy Unpacked event happening on February 20. Again, we have no confirmation if the smartwatch will be announced by then but fingers crossed, it will be part of their line-up.