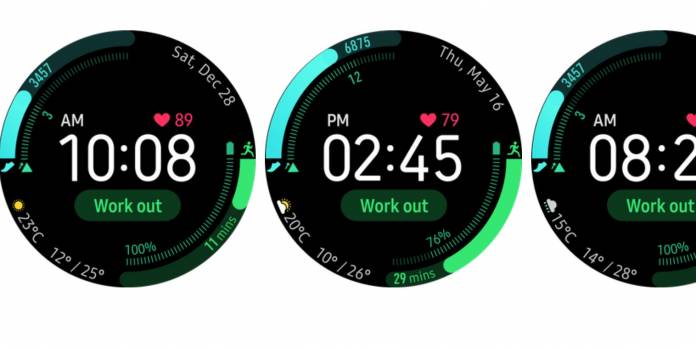 If you’re still satisfied with your older Samsung Galaxy smartwatch but would like to have a bit of a refresh, we have good news for you. Five of the official smartwatches that were released with the Galaxy Watch Active are now also available for the Galaxy Watch, Gear S3, and Gear Sport. This isn’t potentially device changing news but it’s still pretty important if you were a bit envious of some of the watch faces that were released with Samsung’s newest wearable.

According to SAM Mobile, the five watch faces which you can now see in the Galaxy Store are: Health Dashboard, Pop Analog, Solari Board, Breathe, and Pie Twirl. At least two of those, the Health Dashboard and Breathe are perfect watch faces for the Galaxy Watch Active since its focus was on fitness tracking. So even if you have an older smartwatch, you’ll still be able to use these to bring your workout to another level.

The Health Dashboard will of course allow you to view your exercise data like heart rate and steps taken while the Breathe watch face, from the name itself, allows you to start some breathing exercises with just one tap on your smartwatch. The other three are more decorative than functional, but if you feel like seeing something new on your wearable, then it would still be interesting to give them a try.

If you’re thinking of getting a new smartwatch though, Samsung is reportedly already working on the successor to the Galaxy Watch Active, which is, surprise, the Galaxy Watch Active 2. There have been some rumours that the upcoming device will offer even more health-related features like ECG monitoring and fall detection. It will reportedly come in two sizes, 44mm and a slightly daintier 40mm version.

But if you’re still happy with your current wearable, you can download the aforementioned new watch faces from the Galaxy Store by tapping on the links on their names above. It’s as simple as tapping Install and you can immediately enjoy them on your device.