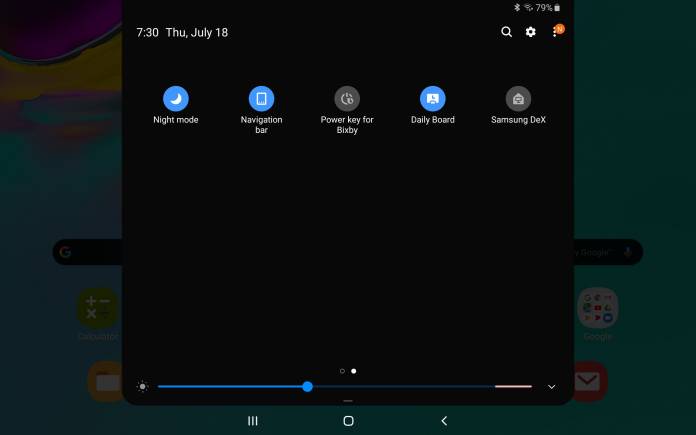 When the Samsung Galaxy Tab S5e first came out earlier this year, it was announced that it will come with Bixby Voice support. But because it didn’t have a physical Bixby key, that support didn’t come out of the box. Now the latest software update to the tablet finally brings Bixby Voice as you can set up your power button to be your dedicated trigger for the digital assistant. Of course, you can always just say “Hey Bixby” but the mid-tier specs of the tablet may make it hard for you to do so.

As per SAM Mobile, once you’ve updated your Galaxy Tab S5e to the latest version, you’ll see in your notifications shade a “Power key for Bixby toggle”. This means you’ll have to manually enable your power key to become your dedicated Bixby button. You can also find this toggle in the settings in the Advanced features menu. If you toggle it on, then you can just long press the power button and Bixby will be activated. You also get the option to add a shortcut to your home screen.

If you prefer using your voice to bring up Bixby, you can train it to recognize your voice and launch at a simple “Hey Bixby”. But since the specs of the Galaxy Tab S5e are in the mid-range, it can be sometimes slow in responding to what you want it to say. So it’s good that you can now just trigger it with the power button. And don’t worry, you can still turn your device on and off with a shortcut to the power menu in your notification shade.

The update also brings support for the Call and Message Continuity feature, that is if you have the LTE variant. This means that you’ll be able to take calls and read messages on your tablet and other devices that support this feature as well, as long as you’re both logged in to the same Samsung account. This only works with 2019 smartphones that had Android Pie out of the box but older devices will also get it once they’ve been upgraded to Pie.

The update to the Galaxy Tab S5e has started to roll out in the UK and in South Korea. It also comes with the regular security patch that Google promised. It should expand to more markets over the next few days.