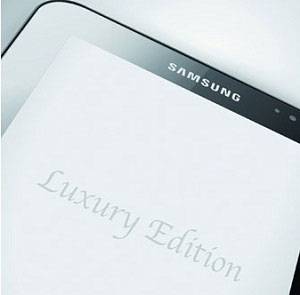 If you are a wealthy geek that wants a Galaxy Tab, but you don’t want the same old plain version everyone else gets a new Luxury Edition is coming. The Luxury version will set you back $1,000 and was unveiled at the Millionaire Fair expo in Europe.

The Luxury Edition is like the standard version as far as hardware and specs go. The only difference is that it comes with an exclusive leather case and a Bluetooth headset. Yeah, those are the only differences.

The Luxury Edition of the Galaxy Tab will launch on Wednesday and sell through the end of January. I would think that Samsung would have at least given a special color to the device, the extra money for a case and a Bluetooth headset hardly seems sensible.