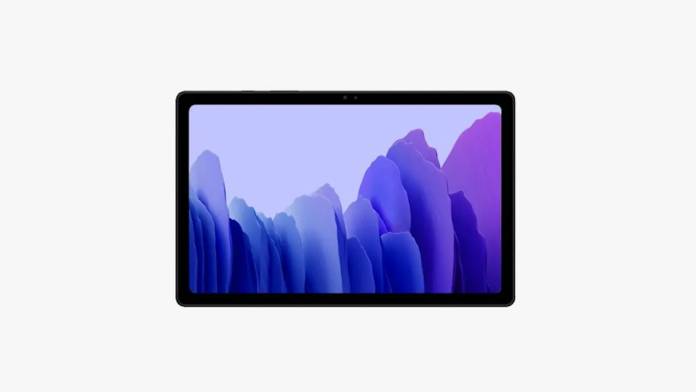 Samsung’s new mid-range tablet has just been spotted on Google Play Console. The listing reveals key specifications of the tablet dubbed Galaxy Tab A7 (2020), which could roll out for an affordable tag, like the other tablets in the Galaxy Tab A series. There is no word on when this slate will go on sale, but we are guessing it wouldn’t be too long now as the Galaxy Tab A7 has been reportedly approved by FCC in the US and has received China’s 3C certification.

According to the Google Play Console listing spotted by 91Mobiles, the Galaxy Tab A7 will feature Snapdragon 662 mid-range processor which was also spotted by Geekbench a few days earlier. The Snapdragon 662 chipset will be paired with Adreno 610 GPU. The tablet will come in 3GB of RAM which will be mated to either 32 or 64GB of onboard storage.

Galaxy Tab A7 Google Play Console listing is accompanied by an image (above), which reveals that the tablet will have an equal bezel on all four sides of the display. Per the source code of the listing, Galaxy Tab A7 (2020) will sport 10.4-inch display with 1200 x 2000 pixels resolution and 240ppi pixel density.

Allegedly, the tablet will ship with One UI-based on Android 10 and it will feature 7,040mAh battery powered by 7.5W charger. According to reports, the Galaxy Tab A7 will measure 247.6 x 157.36 x 293.37mm and will be available in Wi-Fi only and LTE variants. The tablet could have Bluetooth 5.0 for connectivity. More details are expected in the coming days as we close in on the launch date of the tablet.