The Samsung Galaxy Tab 11.6-inch model is nothing more than a rumor for now. Previous rumors suggested this tablet would be coming with a retina or better quality display, and be Samsung’s next flagship tablet with an impressive and high resolution Super AMOLED HD screen and more. While these are only still rumors at this point a new picture over on Samsung.com has us wondering again.

I was skeptical at first after seeing this picture, but after taking a few things into consideration I’ve changed my mind. At first glance for those familiar with Samsung’s legal battles with Apple, you’d see this and say it is the Galaxy Tab 10.1 N from the German markets. The redesigned original Galaxy Tab 10.1, but there are a few things that lead me to think otherwise. According to AndroidandMe the picture was spotted on Samsung.com on the Samsung Exynos 5 dual-core processors product page. The Galaxy Tab 10.1 and N are dual-core Tegra 2 powered tablets. Not Samsung’s new and upcoming Cortex-A15 dual-core 5250. 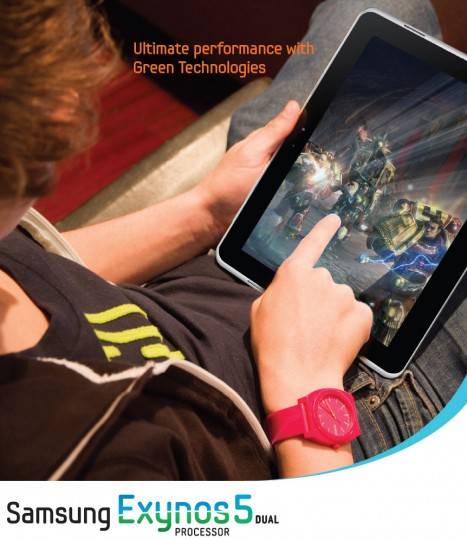 The image above clearly shows it being promoted with the new 5250 and not the older Tegra 2 processor. While the design is similar to the 10.1N this appears to be something different. The speaker grills are slightly larger, and it looks pretty long — possibly an 11.6″ tablet.

Samsung recently announced the Galaxy Tab 2 in a 10″ model and the Galaxy Note 10.1 also. Both of those as we saw at MWC (and linked to below) come with a darker color aluminum and a much larger speaker grill, leading us to believe the image above isn’t those either. The chances that is indeed a new 11.6″ model is possible, running on the still unreleased Samsung Exynos dual-core 5250 or possibly even their quad-core processor that we are expecting to see in the Galaxy S III.

For now this is all just speculation and could quite possibly be a mockup or placeholder image, or that could be the next Galaxy Tab, in an 11.6-inch size that has been hiding under plain sight. If Samsung does release a brand new quad-core or fast dual-core 11.6 tablet with a 2560 x 1600 resolution and 16:10 screen ratio, running on Android 4.0 Ice Cream Sandwich I’ll be getting my wallet out really fast.

Thoughts on the image?