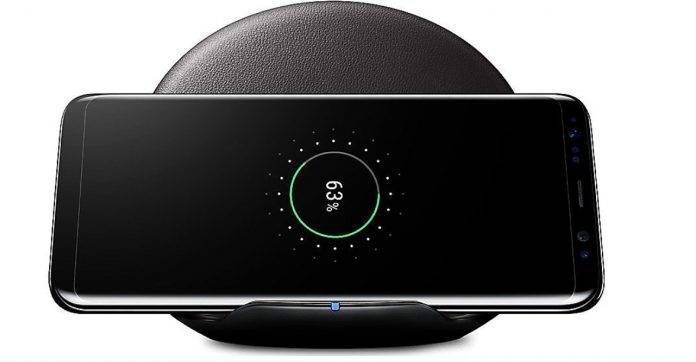 For Samsung fans, February 25 can’t come any sooner as the Korean OEM will finally officially announce their newest flagship device, what we believe to be the Galaxy S9 and Galaxy S9+. But until then, you won’t lack any rumors and leaks about the smartphone and the accessories that may come with them. In this round of what we can expect, we have a leaked image of the wireless charger and also rumors about a Dolby Surround AKG speaker and also a possible real-time translation feature for Bixby.

The new wireless fast charger seems to look like the one released with the current flagship, the Galaxy S8, and Galaxy S8+. There isn’t much difference with the new one, at least when it comes to the design and functionality. However, it is slightly thinner and flatter and instead of three coils in the earlier model, this one will supposedly have just two stacked on top of each other. It may have a 15W capacity with 9 volts and 1.67 amps maximum input power. This means it won’t be faster than other wireless chargers, as was previously rumored. It will probably sell for around $90.

There are also rumors that the Galaxy S9 and Galaxy S9+ will have dual Dolby Surround speakers by AKG built-in. It is the first time that Samsung’s flagship devices will have stereo speakers if this proves to be true. And if you think Bixby, their digital assistant, could be so much more, there might be a real-time translation feature through Bixby Vision and powered by Google Translate.

Of course, none of these are actually confirmed, but all will be known at the official launch on February 25 before the start of the Mobile World Congress in Barcelona. Are you excited to see what Samsung has in store for its fans?