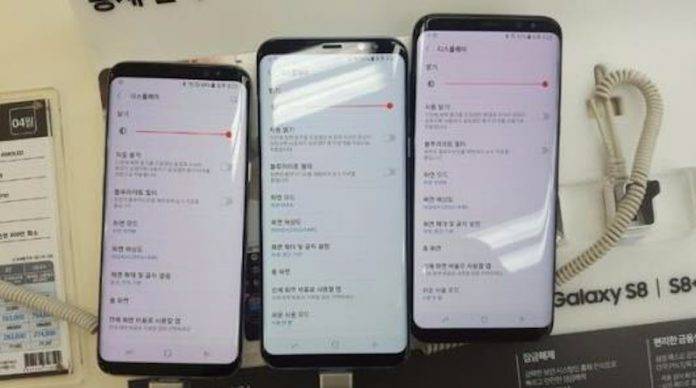 The Samsung Galaxy S8 has only been released to a few users that pre-ordered and is still about to be unleashed in other markets this week, but already it is facing a bit of a backlash. After the whole Bixby controversy, it seems now that users are complaining about the reddish tint that they see in their display panel. While Samsung said that it can be adjusted in the settings, users are saying that they were unable to do so because the display panel was already optimized.

While the problem is not as dire as batteries catching on fire, it still is a problem and another PR disaster waiting to happen. Some industry insiders are saying that the reddish tint may be because of a color balance problem. LCD panels usually have three sub pixels (red, blue, green) but with the Galaxy S8’s OLED panel, you have two sub pixels – red-green and blue-green. To balance out the two greens, Samsung had deep red OLEDs to strengthen the color. But apparently, it’s a little too much.

Early complaints about the Galaxy S8 involves the Bixby button. At first, Samsung said that it can be compatible with other digital voice assistants like Google Assistant or Amazon’s Alexa. But apparently, they changed their mind and now that button is simply for Bixby so Samsung can lock in the users within their system and not use any of their competitors.

The complaints are pouring in for both these issues, and we haven’t even gotten to the street release yet. The industry is watching how Samsung will be able to handle this.