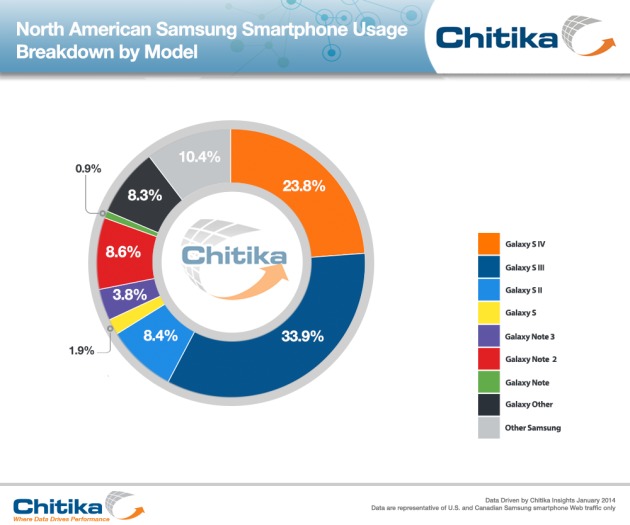 Much is made of Samsung’s various device offerings. New data suggests that, while diverse, Samsung’s market share is still tied up in an older smartphone. Further hammering home the point that they may not need so many devices is their tablet share, where traditional sizes prove much more successful.

The data comes to us via Chitika, an online ad network. They analyzed tens of millions of impressions for Samsung smartphones, and broke the data out from there. The Galaxy S3 is still king, and was responsible for about 34% of the Samsung impressions on Chitika’s network. The Galaxy S4 was second with nearly 24%, but the S3 is still king by a large margin. The Note 2 still beats out the improved Note 3, and the S2 still has a respectable showing, and is close to the 8.6% share the Note 2 holds.

When it comes to tablets, Samsung follows the same concept as smartphones; diversity. The data breaks it out to screen size this time, and we see the traditional offerings are really taking the others to task for Samsung. When it comes to their 10.1 and 7-inch offerings, Chitika says they comprise nearly 94% of Samsung’s traffic. Their 8-inch tablets make a good showing, but outside of that, their other tablets only provide about 1.5% of overall traffic for Samsung.

The smartphone statistics can be explained in various ways, too. Contracts expiring, people simply not wanting newer devices, etc. Some will argue that Samsung doesn’t provide enough with new devices to compel users to upgrade. We find more interest in the tablet numbers, though. With a 12.2-inch Note Pro coming, it will be interesting to see if users want a larger device, or if it can even make a dent in these numbers.