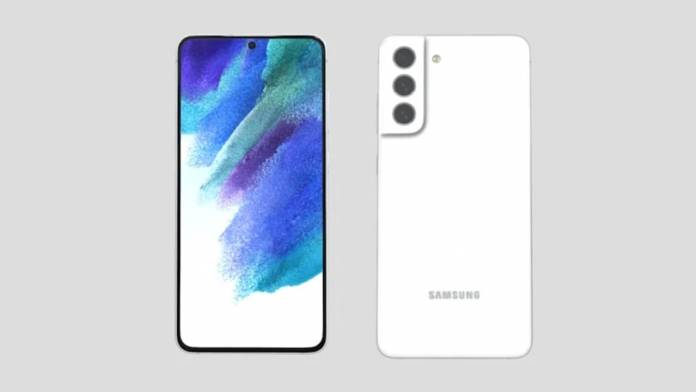 After the high-profile release of Galaxy Z Fold 3, Samsung is prepping its Galaxy S21 FE smartphone, as more information has leaked on the web. The highly-awaited successor to the Galaxy S20 FE is yet again going to cost considerably less than the big brother Galaxy S21 Ultra for users who want an affordable option to get the feel of Samsung’s flagship line-up of phones. Of course, there are going to be compromises on some fronts with this phone, but that is understandable anyways.

This time around the leak comes courtesy of the highly trusted tipster Evan Blass who doesn’t go wrong with his information. The 360-degree renders of the Galaxy S21 FE created in Sketchfab can be seen in his tweet in multiple colors including blue, grey, green, violet and white.

Since it is going to be a striking image of the Galaxy S21 series phones – the design is pretty much the same with a similar-looking triple-camera camera module including a 32MP primary sensor. On the front it has the center-aligned hole-punch camera (12MP shooter) flat display (compared to the curved on the S21 Ultra), on the bottom are the SIM tray, USB Type-C port and speakers.

The phone will have a 6.4-inch AMOLED screen at 2340×1080 resolution with 120Hz refresh rate and will be powered by the powerful Snapdragon 888 SoC. The device will be paired to an 8GB RAM which makes it quite a performance package.

The Galaxy S21 FE is rumored to come with a decent 4,500mAh battery and will support 45W fast charging. Compared to its pricier brothers, the fan edition version is speculated to have a starting price tag of around $699.

While other things cannot be certain at this point, the 3D renders here strongly hint about the phone’s design, and the final released version will look exactly the same if Evan is to be trusted. The phone could be unveiled sooner rather than later, and although Samsung has not revealed any official details, we are more than eager for this year’s fan edition version.