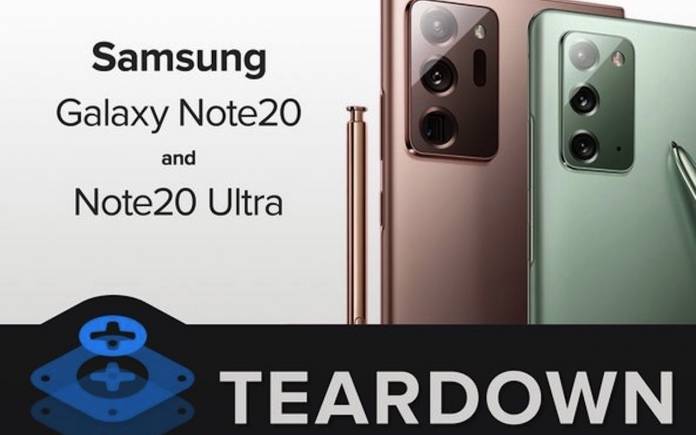 Teardowns can be sometimes controversial because they reveal things are not usually known to ordinary consumers. Through the years, it can be assumed that OEMs have learned to improve the design and development of each and every product as they will be scrutinized by tech enthusiasts and the public. IFixit has managed to do a teardown of the Galaxy Note 20 Ultra 5G last week. It was a live analysis so the tech guys were also responding to the requests of the audience.

A more formal teardown of the Samsung Galaxy Note 20 and Note 20 Ultra is featured on IFixit’s website so you also follow if you wish to open your phone. This round features the two new Galaxy phones side by side.

The two are basically the same in numerous ways but the Ultra model is definitely larger. It also comes with higher specs.

Opening the phones didn’t need much work using the iOpener because of the weather on the west coast. There are still some adhesive but they won’t cause the plastic back to shatter.

Remove the standard screws once you see the inside. You can quickly see an earpiece speaker near the upper antenna, rectangular speaker with a red gasket, and a rear-facing mic.

The batteries of both phones were glued down but good thing there is an adhesive remover plus suction cups. Underneath the motherboards are copper heat pipes. However, the US-spec phones don’t have them. Apparently, some of the copper was placed behind the AMOLED displays.

Repairability is low: 3. The components are modular and can be easily replaced. You only need a screwdriver plus standard Phillips. Replacing the battery may be a bit challenging. Even screen repairs could be tedious.