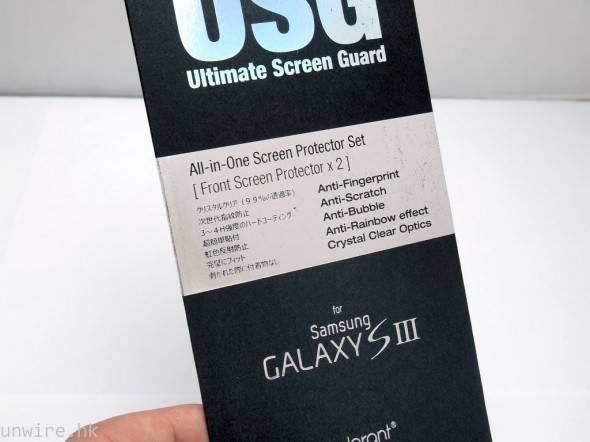 A popular South Korean screen protector manufacturer by the name of Colorant has just released their USG (ultimate screen guard) protector for the new Samsung Galaxy S III. With the announcement only days away we will know all the details soon, but these new pictures show what is likely the official size, shape, and design for the Galaxy S III. It matches the recent leaks we’ve reported and are linked to below. Check the pictures out after the break.

The folks from Unwired HK have posted multiple pictures of the new screen protector sitting on top of multiple phones that aren’t the Galaxy S III. Obviously it doesn’t fit but you’ll see an excellent comparison between the original international Galaxy S II (4.3″), and even the new 4.7″ HTC One X. This basically confirms the name, Galaxy S III, the size, 4.8-inch, and the shape of the screen — which matches the multiple leaks we’ve posted about all week long.

Looking at the comparison shot from the gallery below of the screen protector over the HTC One X and its 4.7-inch screen we have reason to believe the SGSIII will in fact launch with a 4.8-inch screen. Being slightly longer and having the dedicated menu button lower than HTC’s capacitive buttons. Obviously this is only a rough estimate, but the pictures give you a real idea of what to expect once this phone is revealed come May 3rd.

For now you’ll want to check out the pictures and links below, but be sure and stay tuned right here at Android Community as we’ll be live in London for all the news, coverage, pics, and video of the brand new Galaxy S III as it gets announced.